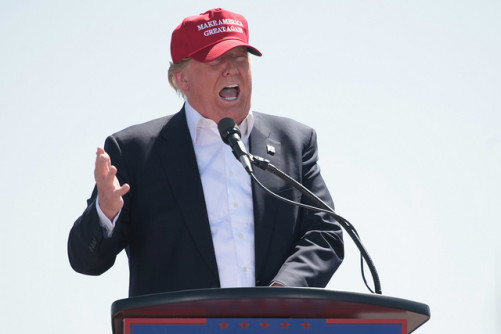 The Anti-Defamation League turned the tables on Donald Trump ahead of his speech at pro-Israel lobbying group AIPAC’s (The American Israel Public Affairs Committee) annual conference on Monday. According to the Jewish organization, which addresses anti-Semitism and other forms of bias, Trump has donated several tens of thousands of dollars throughout the past few decades to the nonprofit. However, in light of comments made during this presidential campaign alienating immigrants and Muslims, the ADL just doesn’t feel right holding onto those donations.

For Time, Anti-Defamation League CEO Jonathan A. Greenblatt released a statement on behalf of the group on Monday to explain the organization’s decision to redirect Trump’s past donations, particularly ahead of the AIPAC conference, the annual conference focused on strengthening American and Israeli relations:

In the past decade or so, Mr. Trump and his foundation have contributed a total of $56,000 to our organization. These undoubtedly were sincere gifts. But in light of the recent campaign, we have decided to redirect the total amount of funds that he contributed to ADL over the years specifically into anti-bias education programs that address exactly the kind of stereotyping and scapegoating that have been injected into this political season.

The donations will be funneled into ADL’s “No Place for Hate” programs, which help schools institute initiatives combating bias and bullying in and outside the classroom. The programs are available countrywide, including in New York, Washington D.C., Atlanta, San Francisco, Denver, and other areas.

In part, Greenblatt says he hopes ADL’s decision will compel other nonprofits to do the same as a powerful response from the sector against Trump’s rhetoric.

I call on other Jewish groups—and any other philanthropies and non-profits—also to redirect any funds that may have been given to them by Trump and use them for similar initiatives to combat hate, promote tolerance, and build a stronger American community. They are welcome to support our No Place for Hate program.

Trump did speak at the AIPAC conference on Monday and was met with some walkouts inside and protests outside the venue in Washington D.C. Some, like Rabbi David Paskin of Florida, walked out of the speech and studied the Torah outside instead. According to the Washington Post, it seems Trump was met with protests and standing ovations from attendees.

This crowd was supposed to be unfriendly to Trump. ROARING with applause as he slams Obama, who has very high approval rating w US Jews.

This rabbi says security removed him from #AIPAC2016 after he raised his hands in protest against Trump: pic.twitter.com/5ewAhxnTzv

For the ADL, AIPAC provided a prime backdrop to discuss their views on Trump given the juxtaposition with the Jewish people’s own struggle with discrimination:

We believe AIPAC was right to extend an invitation to Trump as the presumptive Republican nominee for the highest office in the land. AIPAC has a longstanding practice of extending invitations to all of the Democratic and Republican nominees for office during presidential seasons, and this is in keeping with their tradition of bipartisanship and giving all candidates a chance to have their say.

We also believe that those attendees who might be offended by Trump’s message have every right to walk out on him should they choose to do so, just as others have the right to remain in the audience and hear him out.

And yet, our history, our faith and our values teach us that we cannot sit idly by when others are singled out for derision and when intolerance is fed.

The ADL has been a vocal opponent of Trump over the last several months. The organization was one of many civil rights groups to lambaste Trump after he did not more forcefully rebuke the white supremacist support he had been receiving. Moreover, the ADL was part of the outcry following images of supporters raising their hands in loyalty at several Trump rallies, sending the Internet into a frenzy. To many, the images were reminiscent of the “Heil Hitler” salute.

Former ADL director Abe Foxman remarked that the hand salute was “about as offensive, obnoxious and disgusting as anything I thought I would ever witness in the United States of America.”

“He is smart enough—he always tells us how smart he is—to know the images that this evokes. Instead of asking his audience to pledge allegiance to the United States of America, which in itself would be a little bizarre, he’s asking them to swear allegiance to him,” Foxman continued.

In his letter, Greenblatt reiterates that this ought to be a universal effort to push back against Trump’s campaign. “We are taking this step to demonstrate that, even as the campaign has surfaced ugly rhetoric, we can reach higher. Even as his campaign has mainstreamed intolerance, we can push back on the hate and evoke our better angels not just with words, but with deeds.”—Shafaq Hasan