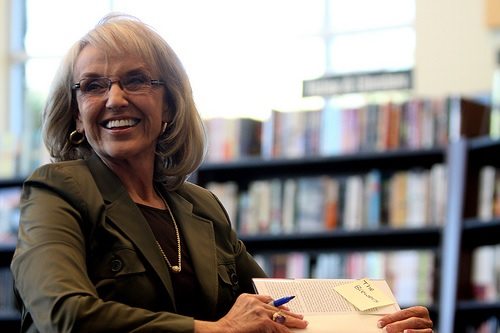 You can just feel the ripples of deep breathing from Arizonans now that Governor Jan Brewer has vetoed the state-sanctioned discrimination bill that would have made Arizona a radioactive state for economic development—and potentially the first from which the National Football League might have removed its scheduled Super Bowl.

But as Arizona goes, will other states follow? Several states have pending legislation that would do much the same as Arizona’s vetoed bill to allow for discrimination against gays, lesbians, and others based on sincere religious belief. Although a bill that would do this in Kansas was nixed in the legislature, one in neighboring Missouri is still waiting a vote from legislators. Note that the bill in Kansas would have even allowed state workers to cite their religious beliefs for choosing not to deliver state government programs.

A bill in Tennessee tracks the Arizona and Missouri bills, but without the Kansas addition of allowing government employees to cite religious belief in the denial of services. The pending bill in the Illinois legislature is narrower than Arizona’s vetoed law and the Missouri bill, basically introduced as a countermeasure to a law passed last year that gives the same rights, benefits, and protections to same-sex and opposite-sex parents and their children. The Illinois bill would exempt religious institutions, including religious schools, from providing their facilities for “marriage solemnization ceremonies” if they violate their religious beliefs. In South Dakota, a pending bill looks like the one in Illinois regarding marriage, though its sponsor had introduced and then withdrawn a bill that resembled Arizona’s state-sanctioned discrimination.

Typically, the Arizona-type laws don’t specify LGBT issues as the reason for allowing and sanctioning discrimination based on “sincere religious belief,” but a pending Oregon bill, meant to counter that state’s existing law prohibiting discrimination based on sexual orientation, would protect people who discriminate when their actions are “based on religious beliefs against same-sex marriage/civil union/domestic partnership ceremonies.” Hawaii’s too has LGBT code words, promising to protect nonprofits and religious organizations when they deny service “related to any refusal to provide goods, services, or facilities for the solemnization or celebration of a marriage that is in violation of the organization’s religious beliefs or faith.” The Arizona legislator who held up a big, visible anti-LGBT sign on the floor of the House to remind people who the bill was really targeting wouldn’t have needed to do so in Oregon or Hawaii, given the legislative language.

These aren’t the only ones. Despite the scotched Kansas bill, other “religious freedom” bills have popped up in Ohio, Oklahoma, Mississippi, and Idaho, just to name a few. Reportedly, a bill is being prepared for introduction in Georgia.

Even if other legislatures do follow Arizona’s lead to pass this kind of silly legislation, our guess is that governors will follow Brewer’s path of laying down a veto so that their states don’t turn into laughingstocks. Nonetheless, these bills aren’t appearing sui generis; someone—or some institution—is doing some of the conceptualizing and even drafting. In Arizona, it was the Center for Arizona Policy. The array of supporters of these bills in other states is difficult to track down, but there are organizations from the religious right that have long been opposing equal rights for same-sex marriages. The Kansas bill was apparently drafted by the Washington-based American Religious Freedom Program, which admits to also drafting the Tennessee bill. Mother Jones also reports that the Idaho bill had the drafting input of the Cornerstone Family Council in Idaho, which is a member of Focus on the Family’s Citizen Link, which also includes the Center for Arizona Policy as a member.

We received suggestions that these religious discrimination bills might have emanated from the American Legislative Exchange Council (ALEC) or might have been connected to groups with the State Policy Network, and perhaps there are some overlaps, but these bills really are “religious right” bills. After ALEC’s disastrous foray into stand-your-ground and voter ID laws, one has to suspect that these free-market think tank networks are going to steer clear of religious issues in order to avoid upsetting their business partners and backers, especially with the opposition of American Airlines and the NFL to the Arizona law and the track record of Atlanta-based Delta Airlines and Coca-Cola being visibly connected to gay pride events in Georgia.

Congratulate Governor Brewer for standing up against the political pressure of the religious right wing, but there are more of these laws percolating in other states in need of attention from civil rights activists.—Rick Cohen