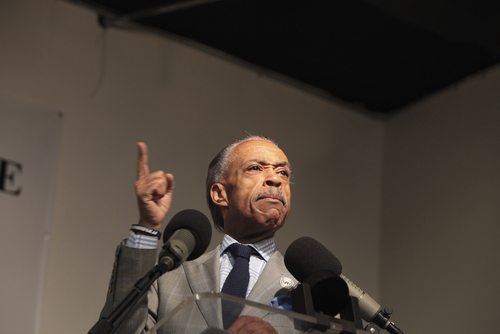 Al Sharpton’s position as a spokesperson for the Black Lives Matter movement was, as NPQ has previously reported, questioned by many younger leaders who were interested in having voice in the movement.

Sharpton took offense and, in an ill-advised discussion at the Harlem office of the National Action Network, he likened the young leaders to…well…streetwalkers who were being “pimped out,” though it was not clear who was doing the pimping. But Sharpton suggested in long form that they were being turned against, and encouraged to argue with, their “Mommy and Daddy.”

Whomever Sharpton means by “they,” “they tell them what they want to hear,” he said:

“They don’t tell you ‘I’m going to turn you out.’ They tell you, ‘You’re beautiful. Nobody appreciates you like I do. Look at you. You deserve all these material things. You’re not being in that London Fog coat. You should be in minks. You should have diamonds. You should have earnings [and] all you’ve got to do is come with me. We can have a brand new car together. We can buy a house in the suburbs together.’ And after they seduce you, they reduce you. And I’m not going to sit here and let them reduce our children.”

Josmar Trujillo, founder of the group New Yorkers Against Bratton, said Sharpton has not been helpful to the younger activists seeking police reforms in New York City. He said:

“As we move ahead here in New York, inspired by Ferguson youth, we’re speaking truth to power. Sharpton, and others like him, are in fact much too cozy with power to fill that role. For the former informant to paternalistically admonish younger, more dynamic leaders by comparing them to ‘hoes’ is just another self-serving attempt to squash dissent as he wrestles for control of a movement that’s leaving him behind.”

Meanwhile, in another flamboyant display of an out-of-control ego, Sharpton said so many objectionable things in an extended profile of him in the Washington Post that he set off a Twitter stampede, consisting of his own self-anointing words repeated by non-fan activists.—Ruth McCambridge