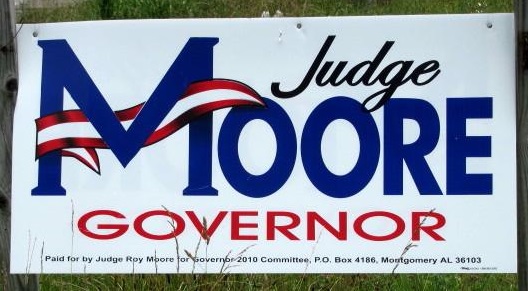 Alabama Supreme Court Chief Justice Roy Moore has been dismissed by most legal observers as something of a legal “crackpot,” in the words of CNN legal commentator Jeffrey Toobin, for his theory that a state can override the civil rights of LGBT persons regardless of what the federal government does, either through law or through a decision of the Supreme Court of the U.S. In February, after the U.S. Supreme Court issued a decision that would allow same-sex marriages in Alabama, Moore issued an order instructing Alabama probate judges that they couldn’t issue marriage licenses for same-sex couples.

As Toobin observed at the time of Moore’s declaration, “He is not someone who understands the law as the rest of the world understands that he’s got some bizarre fixation about how he alone can interpret state law that trumps federal law, he’s wrong on this. And the only question is, is he going to be forced out of his job again for his own imagination of how the law should be instead of how it is,” alluding to Moore’s removal from the Supreme Court several years ago for refusing to remove a plaque of the Ten Commandments from his courtroom despite its violation of church/state lines.

While viewed skeptically at best by most of the nation, Moore is still admired in some quarters in Alabama. This past week, a group called the Coalition of African American Pastors gave Moore its first-ever “Letter from Birmingham Jail Courage Award” for his stance that his personal interpretation of the law overrides that of the U.S. Supreme Court.

Journalist Kyle Whitmore’s article raises serious questions as to the membership and legitimacy of the Coalition. In its attempt to collect 100,000 signatures opposing gay marriage, for example, the Coalition raised little more than 1,000, according to Whitmore. He also quotes the Washington Post’s Lisa Miller to the effect that the coalition’s president, Rev. William Owens, has been a “front man for an ‘Astroturf campaign’ financed by religious conservatives who want to drive a wedge between African-Americans and the LGBT rights movement.”

“In short,” writes Whitmore, “Owens is a lot closer to Fred Phelps and the Westboro Baptist Church than he is to Dr. Martin Luther King, Jr.”

In accepting the award, Moore quoted approvingly from the Plessy v. Ferguson decision of the U.S. Supreme Court in 1896 that attempted to justify the doctrine of “separate but equal.” It is kind of shocking that Justice Moore and the membership, whatever it might be, of the Coalition of African American Pastors would defend the Supreme Court decision that was overturned by Brown v. Board of Education in 1954, a landmark of civil rights accomplishments.

Both Moore and Owens made a number of odd statements during the awards ceremony.

Pardon us for editorializing, but we lean toward Toobin’s characterization of Justice Moore, and regret that Rev. King’s “Letter From a Birmingham Jail” has been misappropriated for the purpose of attacking LGBT rights.—Rick Cohen