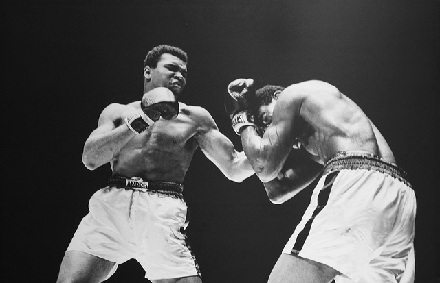 Muhammad Ali is many things to many people. To some, he is the former heavyweight champion of the world whose boxing matches with the likes of Joe Frazier and George Foreman represented the high-water mark for the sport. To others, he is a courageous voice for peace that summed up many in his generation’s feelings toward the Vietnam War through his refusal to fight (while to others, that action made him a traitor). To many civil rights scholars, Ali is the force that emboldened Martin Luther King Jr. to speak out more emphatically against war. Still others vividly remember Ali’s presence at the 1996 Olympic Games, where Ali’s determination to light the Olympic cauldron served as a living monument to the human capacity to overcome adversity. These days, Muhammad Ali is probably the world’s most famous philanthropist working to battle Parkinson’s disease, an affliction that slows down—but doesn’t stop—the former champ.

Ali and a cadre of celebrity friends, including everyone from Billy Crystal and Reba McEntire to Miley Cyrus and Tom Hanks, recently raised $9.1 million in a single night to go toward the fight against Parkinson’s disease. In this USA TODAY video, Ali’s wife, Lonnie, discusses future plans for the Celebrity Fight Night charitable event’s primary beneficiary, the Muhammad Ali Parkinson Center at St. Joseph’s Barrow Neurological Institute in Arizona:

Celebrity Fight Night has raised $70 million for the Barrow Neurological Institute over the course of its 17-year history. Ali, who recently turned 70, remains a true inspiration to many with a passion for peace and philanthropy. Who are some of your philanthropic heroes?—Mike Keefe-Feldman