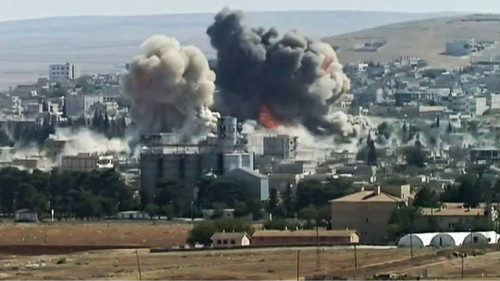 While NPQ has been covering the relief efforts in Syria and the current state of the conflict involving the various political players, we must admit our own level of detachment from the ongoing civil war. For many of us in the United States, we can’t wrap our minds around the situation that has caused hundreds of thousands of Syrians to leave their homes and move to different areas of the Western world, many of which are hostile to them. How can we better understand?

Amnesty International has partnered with Junior, a San Francisco design and technology agency and a group of Syrian activists called Lamba Media Production to put us directly in the middle of the conflict—literally. Through the use of virtual reality technology, the partnership launched 360Syria.com, a website that transports each viewer inside the conflict with a 360° view of the area, combined with a narrated presentation. Viewers are taken through the war-torn streets of Syria, where life continues as usual. We also hear directly from civilians still living in Syria and feel their heartbreak.

“We are living in horror,” says an unidentified Syrian man. “And there’s no electricity, no water—none of the basic living needs at all. We don’t have anything, nothing.”

While news and magazine articles are informative, nothing describes the situation quite like hearing a first-person account of life under constant fear of bombs falling from the sky. There have been other attempts to use virtual reality for the Syrian conflict by the United Nations and ABC News, but this feature adds a different facet to the coverage of Syria.

“Welcome to Syria, a place where people live in fear of the sky,” a voice greets the viewer. The presentation is separated into several chapters, the first of which addresses President Bashar al-Assad’s claims that his administration hasn’t been using barrel bombs, illegal oil drums packed with explosives and shrapnel that are thrown from the sky. Viewers stand in the shoes of Syrians as several videos show devices that look like barrel bombs being dropped just down the street from their homes.

“If a picture is worth a thousand words, then a virtual reality experience is worth a whole book,” said Amnesty International UK director Kate Allen. “Many of us might think we know what’s been happening with the Syrian government’s barrel bombing of places like Aleppo, but viewing these apocalyptic scenes from 360 degrees provides a new level of understanding.”

With each chapter, viewers see firsthand views of demolished buildings, markets that used to bustle with life, and leveled schools. Yet, as the narrator says, school life still continues underground, speaking to the resiliency of the Syrian people, a significant message imparted by the presentation.

Despite our obvious distance from the conflict, even we can see the resiliency of the Syrian people against their government and rebel forces bent on destroying them. That bravery is seen clearly in one of the chapters of the presentation on the “White Helmets,” the unarmed Syrian civilians who risk their lives to save others, regardless of which side they fall on. We can see that resiliency in the incredible footage of a rescue team saving the “Miracle Baby,” a two-week old infant that survived under tons of rubble after his house was struck by a barrel bomb.

While the website doesn’t give viewers unfamiliar with the conflict full context, such as the historical background that has left Syria in the midst of a civil war, viewers will undoubtedly finish the presentation affected by what they have seen. This is very much a country ravaged by war, and perhaps for the first time for many following the conflict, we can understand what that actually means. Just as importantly, the presentation may serve as important documentary evidence for later prosecution for war crimes.

“The devastation in Syria is heartbreaking,” said Zac Rolland from Junior who was involved in this project. “Our challenge was to find the most compelling and accessible way for technology to help the world understand and experience what is happening on the ground. WebVR does just that.”—Shafaq Hasan