Animal Control? Help—There’s a Donkey on the Sidewalk! 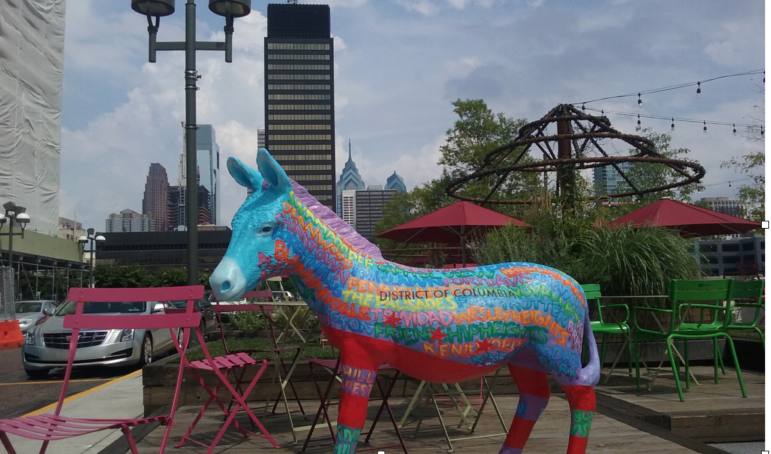 Sometime during the night as the calendar slipped from June into July, a herd of donkeys—57, to be precise—took up residence in and around Center City, Philadelphia. There’s one for each state and territory of the United States, plus one extra to represent Americans who live and vote from abroad. Each fiberglass creature has been lovingly hand-painted by one of 30 local artists.

“Donkeys Around Town,” as the project is called, is a collaborative effort of the Democratic National Convention’s Philadelphia 2016 Committee, the city’s Mural Arts Program and ArtJawn.

Host committee chair, former Philadelphia mayor and former Pennsylvania governor Ed Rendell, suggested the idea, and he’s delighted with the donkeys. “I love the project,” he said, “because I thought it up.” His only beef seems to be that the Massachusetts donkey lays claim to Benjamin Franklin. (The Founding Father may have been born in Boston, but he made Philadelphia his home from the age of 17 and will always be claimed as one of Philadelphia’s favorite sons.)

Artists apparently liked the donkey idea as much as Rendell. When the call went out for donkey muralists, the applications rolled in. A panel judged each submission, and the artists selected were mostly assigned two donkeys each “from randomized locations, (many of which they had never visited).” As reported in the Philadelphia Inquirer, “Democratic delegations provided a list of six icons they’d like to see used on their state’s donkey. Each artist was required to use at least three of them.”

In early June, all the painters came together for a week in an industrial warehouse at the Tioga Marine Terminal in North Philadelphia for what one artist called “donkey boot camp.” Many had already done extensive research on their states and territories. By the end of the week, they had created “a drove of pimped-out Eeyores, including a tribute to the one and only Prince on the rump of the Minnesota donkey.” As Mural Arts executive director Jane Golden observed, “In essence, the artists were storytellers about the states.”

Here is just a modest sampling of the artwork representing Pennsylvania and surrounding states: “The prototype, Pennsylvania’s donkey, has the Liberty Bell, the state flower, and an Amish buggy. Delaware’s has a tribute to the late Beau Biden. New Jersey’s bears images of Frank Sinatra, Atlantic City and the ‘Trenton Makes’ bridge.” A map showing the locations of all 57 donkeys may be seen on the ArtJawn website.

As reported in the Philadelphia Business Journal, the DNC Host Committee will hold an online scavenger hunt, open to Philadelphia residents and visitors alike, from July 21st–28th. (The convention itself runs from July 25th–28th.) “Each donkey will have a corresponding interactive challenge that can be completed to earn points using the Scavify app. Participants will be asked to answer questions, check in via GPS or take photos at each donkey location to accumulate points and win prizes.” Prizes include cheesesteaks (surprise!), tee shirts, tickets to local museums and sports events, and more. While the scavenger hunt will only last for one week, the donkeys will be hanging around town until September 5th. Hee-haw!—Eileen Cunniffe