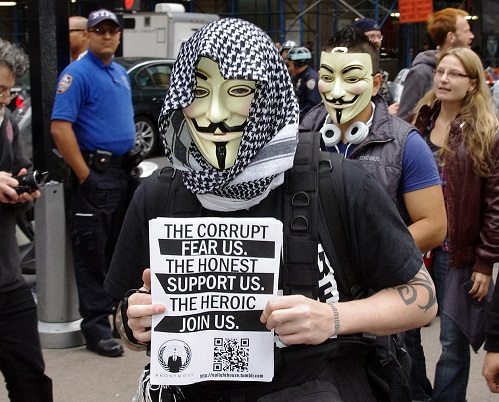 There is a long history in this sector of taking up cases that appear to be inadequately dealt with by the criminal justice system. In some situations, it may mean questioning what appears to be an unjust conviction, or alternately, a cover-up of a crime, or a lack of prosecution.

Last year, an offshoot of Anonymous called Project KnightSec began to make waves about what it characterized as a cover-up of the rape of a 16-year-old girl in Steubenville, Ohio. Steubenville is a football-obsessed town, and two of the high school’s star players were allegedly involved in the incident, which was recorded and played on social media by the “rape crew.” The campaign by KnightSec apparently advanced the investigation, and some of the players were eventually convicted.

Some claimed that KnightSec’s part in the case whipped up a kind of vigilante hysteria, but now, a year later, four school officials, including the school superintendent and the principal, have been indicted by a grand jury for interfering with the prosecution of the teens. If they are convicted, it will prove KnightSec’s point.

Indicted are Steubenville school superintendent Michael McVey, who was charged with one count of felony tampering with evidence and two counts of felony obstruction of justice, along with two misdemeanor charges of making a false statement and obstructing official business; elementary school principal Lynnett Gorman and wrestling coach Seth Fluharty, who are both charged with failure to report child abuse; and volunteer assistant football coach Matt Bellardine, who was charged with four misdemeanors.

There is no doubt that vigilantism can be destructive, but when a culture makes proper prosecution difficult and nigh on impossible, it is up to the public to call attention to it until appropriate attention is paid.—Ruth McCambridge