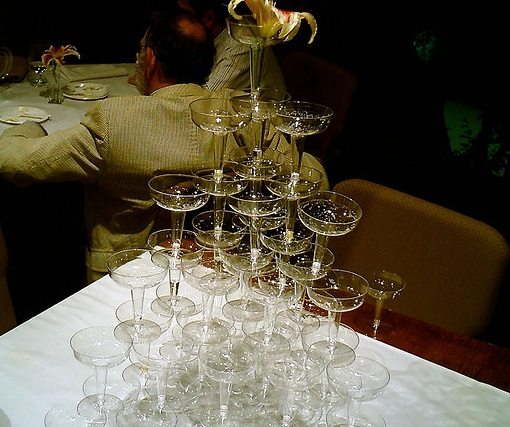 At a luncheon fundraiser for the Florida Women’s Club, attendees purchased champagne for $20 a glass. All the glasses contained champagne. All but one glass also contained an imitation diamond, worth around $10. One glass, however, contained a one-carat diamond valued at $5,000.

One volunteer committee member had asked whether it was safe to drop diamonds—imitation or real—into champagne flutes and then serve them to guests. Andrew Meyer, one of the partners at diamond-donor Continental Wholesale Diamonds said, in effect, don’t worry about it. No one would ever swallow a diamond by mistake!

The diamond donor’s representatives examined the stones each woman found in her glass, but could not find the diamond. Eventually, Miriam Tucker reported having swallowed “something.” A previously scheduled colonoscopy performed two days after the luncheon revealed that the diamond was lodged in her intestine. The diamond was removed successfully, and Tucker intends to give it to her granddaughter as a family heirloom with a unique story.

Most of the time, one can swallow a diamond or another foreign object without damaging oneself. One news report we found includes the following quote:

“Fortunately, 80% to 90% of ingested foreign bodies will pass without intervention,” gastroenterologists at the Walter Reed Army Medical Center wrote in a 2007 paper published in the Journal of Gastrointestinal Endoscopy Clinics of North America. “Objects with sharp edges or pointed tips have the highest risk of complications, up to 35%.”

Tucker, the Florida Women’s Center, and the diamond donor were all very lucky. The outcome could have been tragic if any of the champagne-drinking attendees had ingested a stone that subsequently caused injury or death. The charity has committed itself to serving champagne without stones next year. Every charity tries for something remarkable and different to punctuate its special events. Not all risks can be avoided; some can only be managed. Intentionally placing foreign objects in food, however, is an easy risk to avoid.—Michael Wyland