Some of San Francisco’s charity scandals have their own special socialite flavor, as NPQ readers may have seen in our coverage of Dede Wilsey and the Fine Arts Museums. Helpers Community Inc., which the San Francisco Chronicle has had in its sights since last year, certainly fits in that category.

The organization is 60 years old and is run by Joy Venturini Bianchi, 78, who appears to have made the social enterprise supporting the foundation—a nationally recognized couture resale operation—the new mission. A prominent figure on San Francisco’s fashion and social scenes, Bianchi does not seem to have been very motivated to give away the money Helpers was raising through the resale operation. And, although the three properties the group owns along Golden Gate Park were formerly residences for people with developmental disabilities, now they are home to an upscale boutique and packed with designer clothes.

The property tax exemption they were blessed with now must be repaid to the San Francisco Office of the Assessor-Recorder, in the amount of $31,000. That may be but the tip of the iceberg of consequences for this nonprofit if they do not themselves resolve the situation quickly—and maybe even if they do.

We have said previously that it does not bode well when the executive director responds to this kind of allegation rather than the board, so when Bianchi responded to an exposé in the San Francisco Chronicle in a letter to supporters, writing that the story “does not reveal the depths of my soul nor the intentions of my heart” and that she “can unequivocally state that [she has] never mishandled funds or donations of any kind for my personal use,” we simply waited for the other high-priced shoe to drop. 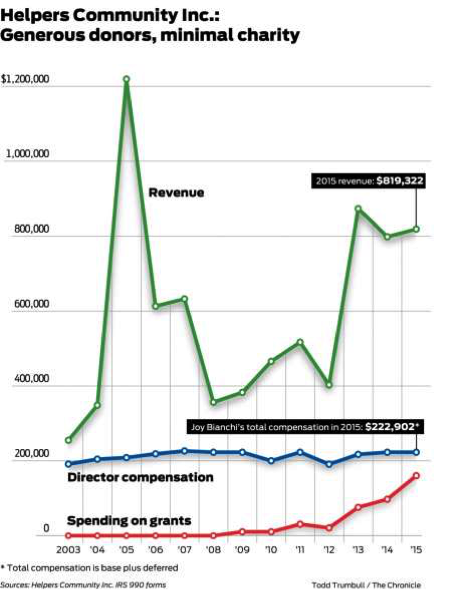 That shoe-drop occurred within days. The chart above reflects the finances of the $6 million nonprofit.

Bianchi, even as paid staff, had been sitting on the board but was kicked off almost immediately. (Wilsey, too, by the way, served a dual role as board president and CEO at the museums.) The Helpers board also reduced Bianchi’s $193,828 salary by 20 percent. Now, the board is trying to determine whether the organization has outlived its usefulness altogether and where the assets might possibly go. Reportedly, they’ve also drawn up a new job description for the executive director—presumably in case the organization decides to go on. Still, according to Marie Lipman, whose aunt is Sister Miriam Auxilium O’Gara, the founder of Helpers, “The facts are obvious that the foundation has outlived its mission.”

I certainly was surprised and offended to learn that Helpers was still functioning even though its residents had been moved out long ago and no longer received any kind of support. […] For 13 years, Helpers gave nothing to residential programs. And from 2003 to 2008, the group gave nothing to any charitable cause at all, financial records showed. Most donations in recent years have gone to a group that repairs facial deformities in children overseas.

In her own defense, Bianchi has said she spent many years traveling the country in an unsuccessful quest for suitable organizations to fund. But was that journey strictly necessary? Board members have since visited a number of service providers for people with developmental disabilities in and around San Francisco and it’s likely that worthy recipients of the assets of the organization can be found among them.—Ruth McCambridge