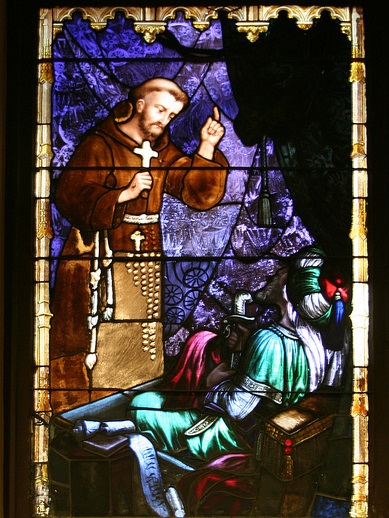 A few weeks ago, NPQ published a newswire about “defensive architecture,” urban design that is hostile to humans. The source article discussed such stuff as spiked areas where homeless people might sit on the grounds and benches designed to discourage comfort. But the Archdiocese of San Francisco has taken things to a whole new level by installing a system that periodically dumps water through a hole in the ceiling into the four sheltered doorways of Saint Mary’s Cathedral where homeless people sometimes go to rest. This repellent system has been in place apparently for a year.

KCBS in San Francisco, which reported on the system, observed the shower running in four different doorways for about 75 seconds every 30 or 60 minutes, starting before sunset and soaking homeless people and their belongings. There are no signs that warn people about what will happen if they take refuge at this house of God.

Once it was brought to their attention, the San Francisco Department of Building Inspection issued a notice of violation for “the unpermitted downspout,” sending its chief plumbing inspector to the site on Tuesday. The Archdiocese was given 15 days to remove the system but it vowed to have it gone by the end of the day.

The archdiocese issued a statement that read in part, “The people who were regularly sleeping in those doorways were informed in advance that the sprinklers were being installed,” adding, “The idea was not to remove those persons, but to encourage them to relocate to other areas of the Cathedral, which are protected and safer.”

It continued: “We are sorry that our intentions have been misunderstood and recognize that the method used was ill-conceived. It actually has had the opposite effect from what it was intended to do, and for this we are very sorry.”

Chris Lyford, speaking for the Archdiocese, which does fund programs to address homelessness, said cathedral staff tries to help. “We refer them, mostly to Catholic Charities, for example, for housing,” Lyford said. “To Saint Anthony’s soup kitchen for food, if they want food on that day. Saint Vincent de Paul, if they need clothes.” But they keep coming back. “We do the best we can, and supporting the dignity of each person. But there is only so much you can do.”

“I was just shocked, one because it’s inhumane to treat people that way,” one neighbor said to KCBS. “The second thing is that we are in this terrible drought.”

In general, it appears that the archdiocese is embarrassed, but perhaps those who made the decision should think about having water poured over them periodically during a night spent outside.—Ruth McCambridge