Are Rumors of Occupy’s Demise Premature? 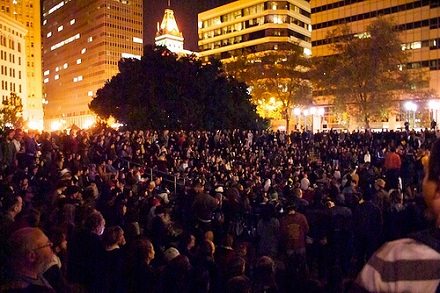 The NPQ Newswire asked earlier this week for commentary on why the Occupy Wall Street movement seems to have petered out. Some don’t think it has petered out.

Rob Kall of OpedNews implies that the questions others and we have raised reflect a “top-down perspective” that suggests the Occupy movement “was a failure that did nothing.” That’s not exactly right. In the NPQ Newswire, we have long credited Occupy for galvanizing the nation’s attention to the divide between the top 1 percent and the remaining 99 percent in terms of power and wealth, making that part of the political frame of the moment, changing discourse in state and federal agencies, and even prompting some politicians to back off their openness to “untaxing” the rich (New York Governor Andrew Cuomo comes to mind, dropping most of his plan to free the state’s wealthy from the state’s “millionaire’s tax”). The question the Newswire raised wasn’t about Occupy’s failure, but about sustainability, about where and what its second or third or fourth acts might be.

Although not offering specifics, Kall is upbeat: “Occupy is the future of hope for the USA and for the world.”

Frances Fox Piven, the co-author of, Regulating the Poor, says that rumors of Occupy’s demise are premature. Piven contends that “like earlier great movements that changed the course of American history, Occupy is fueled by deep institutional lacunae and inconsistencies” and will not subside quickly.

She identifies “two great tasks” for a sustainable movement: first, the “communicative” task to “use its distinctive repertoire of drama and disturbance … of crowds and marches and banners and chants, to raise the issues that are being papered over by normal politics, for the obvious reason that normal politics is inevitably dominated by money and propaganda.” Second, she says, the movement must show the ability to “threaten to exert a distinctive kind of power that results from refusing co-operation in the routines that institutionalized social life requires.”

On the communicative side, Piven thinks Occupy has done a good job. Its influence on framing the 1%/99% divide is evident, she says, in “the speeches at the Democratic convention, for example, or on the ongoing strike of 29,000 school teachers in Chicago who have been joined by students and parents in their demands not only for salary increases, but for a roster of improvements in the public schools,” though, we believe the Chicago teachers under Karen Lewis’s leadership didn’t need Occupy’s push. On the distinctive, disruptive power of a movement, Piven believes that Occupy is dealing with change now, organizing campaigns against mortgage foreclosures, student debt, and other issues.

To our mind, there’s a little bit of rose-colored glasses in Piven’s analysis. What she characterizes as “the movement dramaturgy of encampments and masks and general assemblies and twinkling fingers helped to give the message heft and appeal” is seen as not necessarily all that appealing in many circles, and the assemblies have largely broken down. She says it was smart for Occupy not to issue specific policy proposals because “to do so would have ensnared the activists in endless disputes about particulars. But the assemblies seem to have broken down over quibbling about much less than policy particulars.

Like Kall and Piven, we see the advent of Occupy as having done much to alter the public discourse on issues of economic inequality. But it is easy for politicians to mouth Occupy-ish sentiments from the dais in Charlotte while they still soft-pedal efforts to get at the superrich such as the hedge fund managers lurking behind loopholes in the tax code. Unlike Piven, we don’t quite see the outlines of a second act for Occupy – or whether it needs one. –Rick Cohen