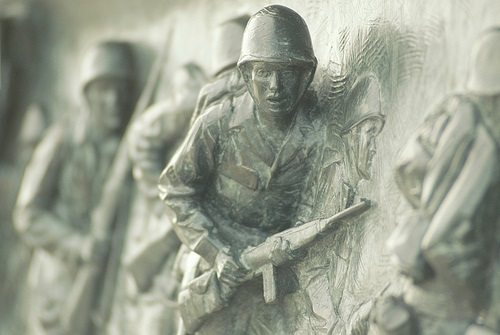 Art may not be the first therapeutic tool that comes to mind when treating post-traumatic stress disorder (PTSD), but it has proven to be effective and is being used in a number of places to help returning soldiers. In El Paso, a new collaborative project called the Soldier Art Workshop Program will be launched by the El Paso Art Association in March. The volunteer effort brings local artists together with area soldiers and their families and is designed to teach art to the soldiers as they “make the transition to normal military and family life after deployment.” Twelve workshops will be held at the El Paso Museum of Art and the Fort Bliss Family Center over the course of a year. They will focus on visual arts, including oil and watercolor painting, mixed-media encaustics, and digital photography.

These artists are in good company in using art with returning soldiers. A National Geographic cover story this month, “How Art Heals the Wounds of War” by Andrea Stone, reported on an art therapy program at the National Intrepid Center of Excellence at Walter Reed National Military Medical Center in Bethesda, Maryland, which had soldiers making masks revealing an aspect of their experience. Melissa Walker, an art therapist who works with veterans at Walter Reed, said the program started in 2010 to help returning injured service men and women. “We needed to look for additional types of treatment,” Walker said. “At the time, I’m not so sure people understood the impact it would have, (but after) a very short time, it became clear [they] were taking to art therapy.”

Jackie Biggs, a 2013 masters graduate from George Washington University’s Columbian College Art Therapy Program, was given a National Endowment for the Arts grant to “integrate art therapy into treatment for active-duty military patients at Fort Belvoir,” one of the first in the country to focus on the area of art therapy for trauma victims. That treatment has now become a standard component of the hospital’s patient/soldier protocol. Biggs believes it’s been effective because “this is a group that tends to internalize their trauma; they hope it will go away if they don’t talk about it.” But swallowing trauma like that can lead to depression, abuse, or suicide, whereas art therapy can “give them a voice when words aren’t there.”

Another program that has received national recognition is Operation Oak Tree, run by the Institute for Therapy through the Arts (ITA) in Chicago. Operation Oak Tree utilizes art therapy and the creative arts to help military families from the time of pre-mobilization and deployment through reintegration. It gained the attention of Second Lady Dr. Jill Biden when it was part of a presentation made in June where Dr. Biden was touring to promote an initiative she’s promoting with First Lady Michelle Obama to mobilize all sectors of society to give members of the armed forces and their families opportunities and support.

The new El Paso program has the potential to serve as an affordable model in this vein because it encourages the local arts community to serve as a conduit for supporting soldiers and their families at a very difficult time.—Susan Raab