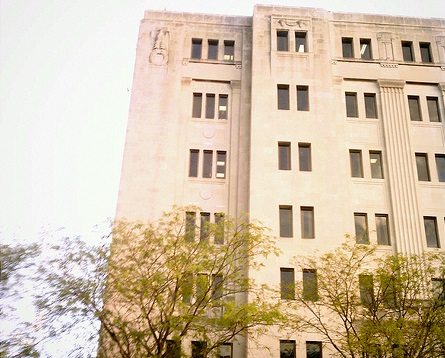 In an effort to bring some humanity to one of Cook County, Chicago’s toughest institutions, a new multi-discipline art project has launched to help integrate art into prisoners’ lives and explore the impact the Cook County Jail has on the surrounding community.

96 Acres, which alludes to the size of the West Side compound of the jail, was launched “last month with an afternoon of poetry and theater outside the jail led by Visible Voices, an ensemble of women who have been incarcerated.” The project’s funds come from $60,000 in private grant money and $20,000 more from the National Endowment for the Arts.

Several individual components of the project, using different media and involving different members of the community, have taken place over the past few months, perhaps to showcase the wide variety of people who feel the impact of the jail system. Earlier in November, young people from the Yollocalli Arts Reach youth initiative of the National Museum of Mexican Art used a pressure washer to create inspirational messages along the dirty sidewalks outside the jail. Likewise, photographers took portraits of visitors coming into the George Leighton Criminal Court, which tries all of Chicago’s felony cases.

While another artist is working with former inmates to create a mural inside the jail, Melissa Garcia is providing letters written by her father, a onetime resident of the jail, as another part of the project. Garcia’s letters provide a vignette of an absent, imprisoned father making promises that he ultimately will not keep once he is released. The portraits of the visitors give a quick, if incomplete, glance into the lives of those with an incarcerated loved one.

Through aggregating differing types of art created by and including inmates, children, and other visitors, the project provides several different perspectives on the jail system, both of those affected by mass incarceration and those seeking to understand incarceration’s role in the community.

“It’s important to understand the place we are neighboring—what we can do as residents to help (people who are released),” said artist Maria Gaspar, one of the project’s directors, who grew up near the jail. “We really hope to just create more consciousness and raise the issues of how incarceration, for example, has increased in this country…how that impacts people of color and people who are poor.” The project raises an important aspect of reforming prisons and prisoner rights that’s often overlooked or not considered.

Cook County Jail, like institutions across the country, has had its share of issues concerning the treatment of prisoners. Just last week, a former Cook County Jail guard, Pamela Bruce, was spared a prison sentence after she ordered and participated in the beating of a mentally ill prisoner. Last month, Bruce was convicted of “official misconduct, perjury, battery, and obstruction of justice related to the 2012 beating of inmate Kyle Pillischafske.” Assistant State Attorney Maria Burnett said of Bruce, “She showed no compassion to Kyle or the other individuals when she got them to beat him. She showed no honesty.”

Whether or not Bruce’s case reflects an uncompassionate perception of prisoners that’s common among prison workers, many outside of the system certainly feel little remorse for the conditions often found in prisons. However, research shows that prisoners who are enrolled in rehabilitation programs are less likely to reoffend and end up back in prison. Some prisons are undertaking the task of reducing incarceration time in favor of structured “re-entry programs.”

In the state of Louisiana, the State Penitentiary known as Angola is part of the Offender Rehabilitation and Workforce Development Program. The program lets defendants convicted of less serious crimes serve as little as two years, learn a vocational skill or trade in prison, and then serve five years on probation while working. Prisoners are not eligible if they have convicted crimes of violence, like murder, sexual assault or are repeat offenders. The program puts an emphasis on counseling to try to target mental health, which often falls through the cracks in prison systems.

Angola also allows inmates to work in the prison’s hospice program, which gained national notoriety and became the subject of a documentary a few years ago. The program allows inmates to provide end-of-life care to dying prisoners, a particularly poignant act for some of the inmates, who are serving life sentences for murder.

While the project was initiated in part to assess the impact the jail has on the community, it is also worth considering what impact 96 Acres will have on the inmates. Given what we know and understand about the human spirit, the integration of the outside world via art into the dreary life of a prison ward could have a rehabilitative effect otherwise absent from Cook County and prisons across the country.—Shafaq Hasan