As in the U.S., Voting Rights an Issue in Canada 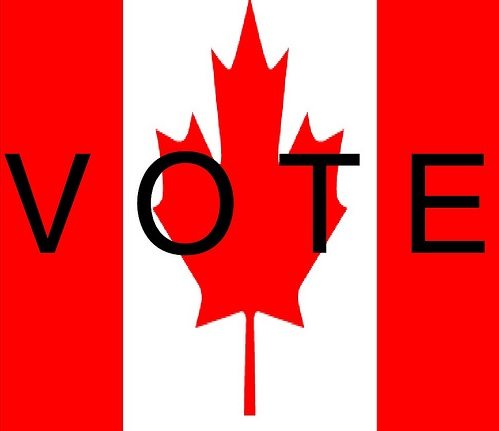 In the U.S., it is all too clear that many of the “voter ID” laws passed in several states had the all-but-overt purpose of suppressing voter turnout. We expect better of our northern neighbors, but apparently the Conservative Party government has a proposal, according to the Globe and Mail’s Steven Chase, for “stripping Elections Canada of its authority to encourage Canadians to vote in federal ballots.” The proposal would restrict the chief electoral officer on the kinds and depth of information that can be provided to the public, limiting the information to “five matter-of-fact topics related to how to vote or become a candidate.”

Chase writes, “The Conservative bill will remove parts of Section 18 of the Elections Act that give the chief electoral officer the authority to provide the public with information on ‘the democratic right to vote’ and to ‘make the electoral process better known to the public, particularly to those persons and groups most likely to experience difficulties in exercising their democratic rights.’”

In other words, under its current mandate, Elections Canada has the ability to inform Canadian citizens of their democratic rights, not just to issue dry instructions on where and how to vote. It even has a specific $8.5 million budget for “electoral engagement.” But Pierre Poilievre, the Conservative “minister for democratic reform,” says that politicians rather than government bureaucracies should be “inspiring voters to get out and cast their ballots.” Elections Canada, Poilievre’s staff says, should “focus on its administrative role…[which] means running elections and letting electors know when, where and what ID to bring to vote.”

Who loses out in this narrowing of Elections Canada’s mandate? Craig Scott, the “NDP critic for democratic reform”—that is, sort of the shadow minister for this function within the NDP opposition—thinks that the restructured, narrow-scope Election Canada mandate is meant to deter government from “encourag[ing] voting, particularly among disadvantaged groups” that would be more likely, he suggests, to vote against the Conservatives.

In addition, the new proposal would remove Elections Canada’s function of “investigating and prosecuting electoral wrongdoing.”

Another argument of the Conservatives for doing away with Elections Canada’s electoral turnout boosterism is that turnout hasn’t been stunning in Canada. In the 2011 federal elections, 61 percent of eligible voters actually voted, which Chase says was one of the lowest turnouts in Canadian history. By many indicators, while Canadians may have good reason to be displeased with election turnouts there, our northern neighbor has historically done better than we here in the U.S. United Nations statistician Howard Steven Friedman puts Canada well above the U.S. in terms of voter turnout for parliamentary elections (e.g., the U.S. House of Representatives) and above France and Portugal as well, but below Australia, Belgium, Italy, Spain, the Netherlands, and even the U.K. in terms of voter turnout as a proportion of registered eligible voters. Writing for the journal Democracy, Michael Zelenko says that voter turnout in the U.S. for congressional elections has dropped by 30 percent in the last half century. As reviewed by Canadian sources themselves, Canada’s voter turnout ranks below many other countries, but gets a grade of “C” compared to a grade of “D” for the U.S. 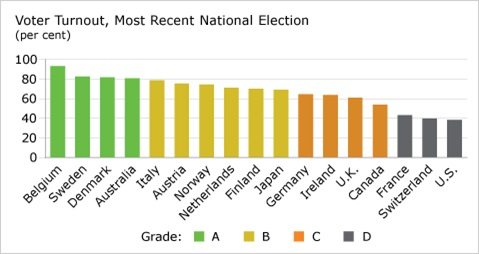 Interestingly, the debate over elections in Canada addresses, as in the U.S., issues of voter fraud—and, like the evidence in the U.S., the issues tend to involve not people falsely trying to vote, but official efforts to suppress voter turnout. According to Steven Shrybman, the counsel for the Council of Canadians, writing for the Ottawa Citizen, the courts found that “contrary to Conservative government denials…[a] ‘deliberate attempt at voter suppression’ took place ‘across the country’ during the 2011 general election that was targeted at non-Conservative Party supporters, and identified the Conservative Party’s CIMS database as the likely source of information for those efforts.” The Conservatives’ approach to modifying the mandate of Elections Canada would reduce or eliminate the ability of the Chief Electoral Officer to make public through the media and other mechanisms instances where under the color of official action entities try to “deprive Canadians of their democratic franchise.”

It seems to be that groups like the Council of Canadians and their counterparts have a vital role to play in ensuring that governmental entities encourage rather than suppress voter turnout. But the debate in Canada suggests that the climate for encouraging voter turnout starts at the top, with the governmental agencies in charge of promoting the democratic process, and it can hardly depend on political parties in either the U.S. or Canada if one or both of them may have an interest in suppressing turnout.—Rick Cohen

More about: ActivismElectoral and Lobbying