As Muslims Celebrate Eid al-Adha, Many Share Cost of Sacrifice 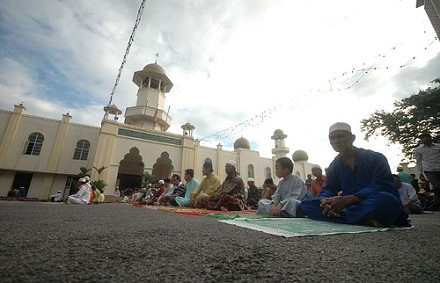 For millions of Muslims, today is the Eid al-Adha (“Feast of the Sacrifice”) festival and some estimates state that as many as 100 million animals will be slaughtered. As part of the traditional Islamic sacrifice, a large amount of the meat from the animals killed is given to the poor as an act of charity.

In Pakistan, the BBC reports that more Muslims are coming together this year as compared to prior years to pitch in on larger animals rather than buying an animal to sacrifice individually. The high price of meat, reportedly a result of inflation and flooding, has made it more attractive for many to split the costs of a cow or a bull as opposed to purchasing one’s own smaller animal (a goat or a sheep, for instance). A similar trend is taking place in Indonesia, where the Financial Times reports that “with nearly half of the country living on less than $2 a day, many Muslim families…have to club together a year in advance to amass the money needed to buy a scrawny goat that has been reared on a diet of waste at a roadside shack.”

But in addition to the individual displays of charity for Eid al-Adha, the Financial Times also notes that some philanthropic initiatives are in place to help those Muslims who want to participate in the sacrifice but cannot afford to do so even if they were to band together with others: for instance, “Dompet Dhuafa, a charity set up by Indonesia’s main Islamic newspaper, urges Muslims to buy three goats for the needy instead of a new BlackBerry, or a cow instead of an iPhone.” Where other examples, be they religious or secular, do you see of charity begetting more charity? –Mike Keefe-Feldman