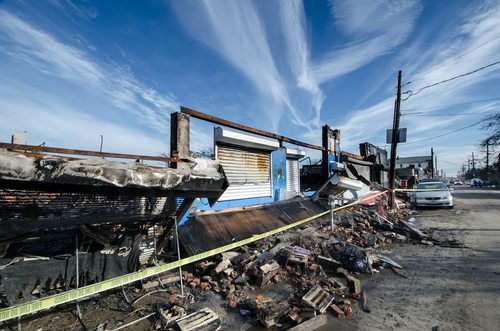 On the same day that NPR and ProPublica released a scathing report critical of the American Red Cross’s operations during Hurricane Sandy and Isaac two years ago, the humanitarian organization announced that it was awarding a $2 million grant to further help victims of Superstorm Sandy in an area that includes Long Island, New York, and New Jersey.

The grant will provide $1.3 million to the Health & Welfare Council of Long Island, an umbrella nonprofit health and human services organization that works with other nonprofits. The organization manages the Long Island Long Term Recovery Group, a conglomerate of other organizations that helps bring legal aid and recovery assistance to Hurricane Sandy survivors.

The remaining $700,000 will be divvied up for other nonprofits, such as the Long Island Disaster Recovery Center and the Southern Baptist Disaster Center, who will receive $500,000 to continue its outreach into communities in New York and New Jersey.

“There is no one organization or one individual that can do it alone,” said Gwen O’Shea, the president of the Health & Welfare Council of Long Island said at a news conference.

The grant comes at a time when the Red Cross has been slammed by a scandal questioning the quality of aid provided to the millions of victims left homeless and penniless after the storms in the mid-Atlantic and Florida.

As discussed yesterday in the Nonprofit Quarterly, the report’s allegations against the failure of the Red Cross to adequately provide help to survivors are varied and require an in-depth analysis, more than the brief highlights to be reprinted here.

However, among the most serious failings the investigation uncovers, corroborated by both internal documents and disaster relief specialists, is that funds were being diverted while the very basic needs of the survivors were not being met. Internal documents and further analysis illustrate a story of an organization overwhelmed and unprepared for the disaster resulting in the failure of their systems. Then there were the allegations of incompetence, such as food being wasted and resources being mishandled, to the detriment of the victims.

Of course, as an organization often at the heart of humanitarian crises, this is not the first time the Red Cross’ work and intentions have been questioned. In the wake of September 11th at a hearing of the House Energy and Commerce Committee oversight panel, then–New York Attorney General Eliot Spitzer said, “I see the Red Cross, which has raised hundreds of millions of dollars that was intended by the donating public to be used for the victims of September 11—I see those funds being sequestered into long-term plans for an organization.” As long as an organization is collecting donations, there will always be questions as to how those funds are being allocated.

Since the release of the report, the Red Cross has taken to their blog to create a matrix in a “Mythbusters” style to debunk the allegations and include information that the report had allegedly left out. However, in trying to clarify the truth, the post only leaves the reader with more questions.

For example, in response to the allegation from the report, “In the early days of Sandy, the Red Cross was wasting an average of 30 percent of the meals it was producing,” the organization begins their reply with, “We have no evidence this happened. What we do know is that we served 17 million meals and snacks, and our feeding trucks emptied out almost as soon as they went out.” However, the Red Cross’ responses in this matrix do not have any accompanying evidentiary proof or corroborating documentation to support their rebuttals.

Interestingly, the vice president of public relations for the American Red Cross, Laura Howe, has also chosen to write a separate blog post commenting on the good that the Red Cross had done during these disasters that the report had left out. Interestingly, she ends her blog with this statement, “The bottom line is that Americans trust the Red Cross and should continue to do so,” as if conceding that the report was in a position to diminish the public’s trust in the organization.

Yesterday in an on-air interview with PBS NewsHour, Suzy DeFrancis, the Red Cross’s chief public affairs officer defended the organization’s response to Sandy. “We know that a disaster, by definition, something is going wrong. And you’re pulling together a whole bunch of volunteers who may not have always worked together. But you’re trying to get food and relief to people. And, of course, there are going to be problems. But the reason that you look at it is so you can find them and fix them and make sure they don’t occur again.”—Shafaq Hasan