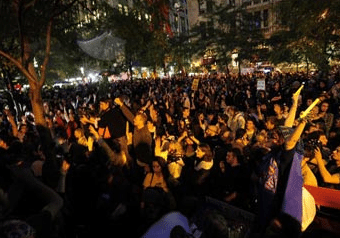 In what may be a semi-coordinated operation, Occupy Wall Street sites around the country are being raided and dismantled, but last night the “mother ship” in Zuccotti Park was cleared by police in a raid that ended in 142 arrests in the park alone and 50 to 60 more on streets nearby.

According to the New York Times, “Most were held on charges of disorderly conduct and resisting arrest, among them City Councilman Ydanis Rodriguez, a Democrat who represents northern Manhattan. He was with a group near the intersection of Broadway and Vesey Street that was attempting to link up with the protesters in the park.”

The police moved in at just after 1:00 a.m., according to OWS, and ended up completely taking apart the encampment, throwing everything into dumpsters—books from the makeshift library, camping gear, and computers—for collection later on by the Sanitation Department. Some protestors chained themselves to trees, which were promptly cut down, according to observers.

In one of the most disturbing aspects of the action, journalists were excluded from the area.

The Occupiers who moved on to Foley Park released a statement right after the raid began, titled, “You Can’t Evict an Idea Whose Time Has Come.”

In part, it reads:

Two months ago a few hundred New Yorkers set up an encampment at the doorstep of Wall Street. Since then, Occupy Wall Street has become a national and even international symbol — with similarly styled occupations popping up in cities and towns across America and around the world. A growing popular movement has significantly altered the national narrative about our economy, our democracy, and our future.

This moment is nothing short of America rediscovering the strength we hold when we come together as citizens to take action to address crises that impact us all.

Such a movement cannot be evicted. Some politicians may physically remove us from public spaces—our space—and, physically, they may succeed. But we are engaged in a battle over ideas. Our idea is that our political structures should serve us, the people—all of us, not just those who have amassed great wealth and power. We believe that is a highly popular idea, and that is why so many people have come so quickly to identify with Occupy Wall Street and the 99% movement.

In recent days police have raided protest tent camps across the nation, including in the cities of Portland, Oregon; Denver, Colorado; Salt Lake City, Utah; and Oakland, California. The NYC raid has occurred on the same day that the White House is hosting a meeting on how nonprofits can support the development of young leaders. Meanwhile, here is a network of developing as well as seasoned leaders who are willing to take risks to ensure that the growing financial inequities embedded in our political and financial structures are addressed. Get out and support them today!