At Liberty University, Students Must Show Up for Ted Cruz or Get Punished 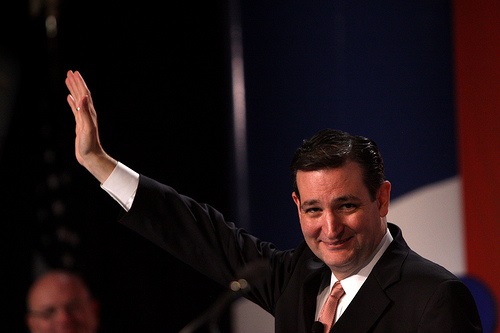 There were 11,000 or so Liberty University students in attendance at Ted Cruz’s TED-talk-like announcement of his candidacy for the Republican presidential nomination. The turnout was fabulous, except that the students were required to be there, else they’d get fined or punished in some other way by the evangelical Lynchburg school.

Attending class is required, but skipping a college class is something that happens, and skipping a college assembly like an assembly or convocation is probably not unusual at other schools. However, cutting class at Liberty University is different. One student explained on her Facebook page that “Students will either attend convocation and lend to the illusion of widespread support for Sen. Cruz, or they will be subject to administrative punishment—specifically, four reprimands and a $10 fine—if they are absent.”

Showing up for Liberty University’s convocation at the Vines auditorium guaranteed Cruz a backdrop of a throng of participating students no matter which way the television cameras pointed. In Cruz’s future campaign ads, the school and the kids are guaranteed to be props, though his opponents are all but guaranteed to point out that his audience was there because the students had to be. During campaigns, the composition of photos with backdrops of nodding supporters and audiences full of largely pre-screened acolytes has become increasingly de rigeur. It’s virtually impossible to look at a political gathering without assuming that it’s really a Potemkin Village event.

There were only two kinds of protests by the Liberty students during the Cruz announcement. One was the use of Yik Yak, an anonymous gossip site, to complain vociferously about being required to attend the televised Cruz announcement and to poke fun at Cruz and his speech.

The other was the presence of a dozen students who showed up wearing T-shirts extolling their favorite candidate—Rand Paul. As Cruz talked, they were able to use the disaffection of some of the Yik-Yakkers to sign up a few of them for the Paul campaign.—Rick Cohen