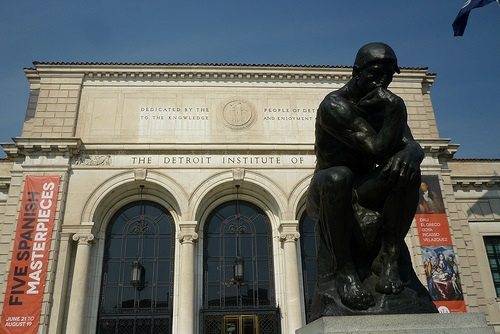 Private foundations could provide half a billion dollars to protect Detroit’s art collection from being auctioned off, and in the process help partially shield Detroit retirees from the financial hit of the city’s bankruptcy, under a plan floated by Chief U.S. District Judge Gerald Rosen, the official mediator between the various parties in the city’s bankruptcy proceedings. The proposal was outlined in an article by Alan Pyke in Think Progress, a progressive political blog published by the Center for American Progress.

The plan was first reported Thursday by the Detroit News, which said that Rosen suggested raising “anywhere from $300 million to $500 million or more” in private funds from nine major philanthropic foundations, to be used to create a nonprofit charitable trust to buy the Detroit Institute of Art’s collection from the city. That would protect the art from being sold off in bankruptcy proceedings and restore hundreds of millions into the city’s pension system. The foundations suggested included the Ford Foundation, the Knight Foundation, and the Kresge Foundation.

“Rosen framed the idea as an answer to concerns about ‘two looming obstacles’ that ‘could bog down the bankruptcy with years of contentious litigation,’ namely the future of the city’s beloved and publicly-owned art collection and the future of its retirees,” reported Pyke on the blog.

Tens of thousands of retired Detroit city workers are in danger of losing their health insurance and pensions due to the city’s bankruptcy, the largest municipal bankruptcy in American history. If the proposal becomes reality, it would be a high profile example of private philanthropy coming to the rescue of a distressed public sector entity and its employees.

At the same time, it would privatize a historically public asset and create a non-profit arts organization to manage it. But the move would keep Detroit’s art collection together in the community, rather than having it sold off piecemeal to collectors and museums out of the area.—Larry Kaplan

More about: Arts and CultureMichigan