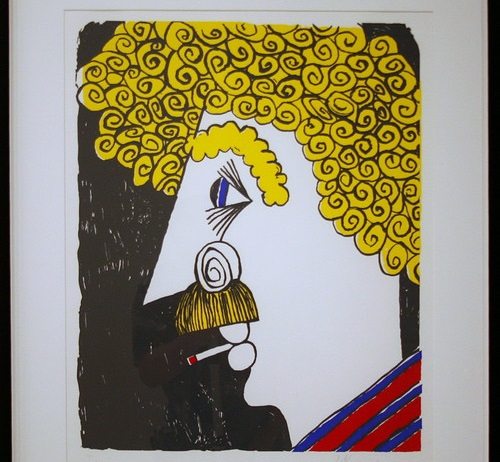 Sunday, September 21st marked the beginning of the American Library Association’s Banned Books Week 2014, “celebrating the freedom to read and taking a stand against censorship.” Libraries across the country are participating in the commemoration, with many taking an interactive approach in order to engage the public and to highlight the continued issue of censorship in the world today.

At the Kurt Vonnegut Memorial Library in Indianapolis, performance artist Tim Youd will be typing Ray Bradbury’s Fahrenheit 451 with the same model of typewriter used by Bradbury. Youd will type the book word-for-word in the library’s large picture window—twenty-four hours a day, seven days a week, at the rate of five or six pages an hour—to commemorate this year’s event. The entire book will be typed on two sheets of paper that Youd types on alternately, the second taped to the back of the first. While he has gotten as much of $7,000 for the unreadable results of his art, this week Youd will be publicly burning the finished piece in an effort to raise awareness for the week’s theme of censorship within today’s communities.

In 2013, 307 books were reported as challenged by the Office for Intellectual Freedom, and the American Library Association (ALA) estimates that 70 to 80 percent of challenged books are never reported. Even nonprofits have been guilty of book burnings within the recent past. Such censorship is in direct conflict with the freedom of expression rights protected by the First Amendment. With once-banned books having shaped American culture and progress, it is important for libraries, schools, and other nonprofits to raise awareness of censorship in America today, and unique artistic performances such as Youd’s are a fitting way to do so.

This is not the first time that nonprofits have used performance art as a means to raise social awareness for injustice. The Humane Society International, for example, sponsored performance artists Jacqueline Traide and Oliver Cronk as part of their worldwide campaign against animal abuse. In a storefront on one of the UK’s busiest shopping streets, Jacqueline suffered through 10 hours of the experiments typically done during cosmetic product testing on animals.

By using performance art, nonprofits and other activists are able to bring their causes to the forefront of public attention. In a time where information is plentiful and easily available, these performances break through barriers to connect the audience to the core of the issue at hand. Art in its essence is a means of expression, and the interconnection of performance art as a means of human (and animal) rights activism will continue to be seen in the political realm.—Michele Bittner

More about: ActivismArts and Culture