Beyond Sustainability: Identifying the Right Resource Mix for Growth

Editors’ note: This article is excerpted from chapter 10 of Finance Fundamentals for Nonprofits: Building Capacity and Sustainability(John Wiley and Sons, Inc., 2011) and used with permission. It was first published at dev-npq-site.pantheonsite.io on December 23, 2011.

On the Upper West Side of Manhattan, across Central Park from the Metropolitan Museum of Art (the Met), stands the New-York Historical Society. It was founded in 1804 as both a museum and a library sixty-two years before the Met and ninety-one years before the New York Public Library (NYPL)—like the Met and the Society, also a nonprofit.1 The combined expenses of these much younger institutions are now thirty times greater than the Society’s.

Sustainability is a necessary condition for long-term success, but it is not sufficient to optimize the impact of an organization. The Society is over two hundred years old, so obviously it is sustainable, but long ago it ceded its preeminent role among New York’s museums and libraries to younger rivals. This article explains how an organization should manage its revenue composition to go beyond sustainability and maximize its growth potential.

All dollars flowing into nonprofits are not equal. Every revenue source has specific characteristics. There is no shortage of theories of revenue management; the best known of these, however, is resource dependency theory, which posits that “the activities of nonprofit organizations are influenced by their outside funders . . . the nonprofit organization and its funders reach agreement [often implicitly] on a set of goals and, in turn, negotiate a stable source of revenues to accomplish those goals.”2 This section focuses on two contrasting theories about how such stability is achieved: portfolio theory and normative theory.

From portfolio theory comes the idea that revenue diversification can reduce financial vulnerability to recession and other external economic shocks. It is counterintuitive, but two highly volatile revenue sources from different lines of business may be more predictable than either one would be separately.3 But each line of business also requires a system to support it, making the organization’s administration and development more costly.

Normative theory suggests that nonprofits should concentrate on sources that are uniquely associated with the benefits to be afforded to a particular population group or groups. In other words, it recommends focus. The downside is having greater vulnerability to disruption in a particular revenue source. (For characteristics of common revenue sources, see figure 1, below.) 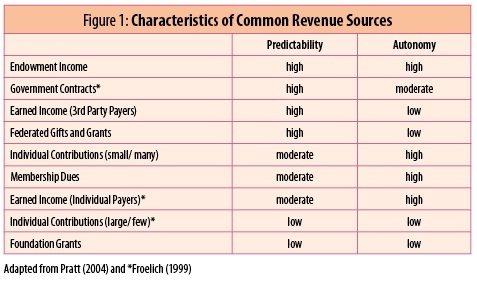 What Do the Mixes in Nonprofit Organizations Look Like?

Every reader of this article knows that income mixes in nonprofits can be highly diverse, but the mixes will often look similar over a field of practice, and many fields show a preponderance of one type of income over another.

Many large nonprofits that have experimented with multiple funding sources in the early stages of development have become large by embracing one particular source type. Out of 200,000 nonprofits that obtained exempt-status recognition since 1970, only 144 currently have at least $50 million in annual revenue. Most raise the bulk of their money from a single type of funding source, and “created professional organizations that were tailored to the needs of their primary funding sources.”4 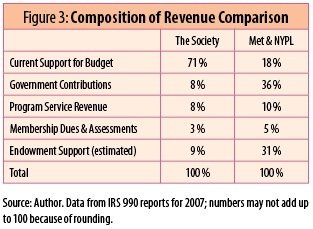 Thus, the key to growth may be in finding the right revenue mix, which may in fact largely comprise a single, well-suited source. “Sources of income should correspond with the nature of benefits conferred on, or of interest to, the providers of those resources.”5 (For revenue types, see figure 2, above.)

Back to the Example

The New-York Historical Society is a museum and a library. Although both divisions are dedicated to the preservation of artifacts, the revenue-raising potential of each division is very different. Most museums are private, whereas most libraries are publicly owned and operated, which suggests that it is difficult to support a library on either earned income or private philanthropy. (See figure 3, following page, for composition of revenue comparison.)

Museums can generate revenue from admissions fees and gift shop revenue. Libraries would probably wither if they tried to charge admission fees, and they rarely have gift shops (bookstores). Both institutions may have dues-paying members, but these so-called members do not have the privilege of electing the board of directors, so their role is more akin to donors.

The data reflect these differences: total expenses of the Met and the NYPL are approximately equal, but the museum’s program service revenue is eight times larger, its membership income is ten times larger, and its net income from sale of inventory is forty-five times larger. On the other hand, government support for the NYPL is over six times that for the Met.

The Society, meanwhile, is almost entirely dependent on gifts. Its competitors derive approximately one-third of their combined revenues from government support and another third from endowment income. Its philanthropic support is under stress, paying for activities that competing institutions finance with different sources of income.

During most of its existence the Society had no government support. Even today, government covers only 8 percent of reported expenses, so apparently the Society’s museum is cross-subsidizing its library. In reaction to successive budget crises, the Society historically cut the budgets of the museum and library in tandem.

Although the Society’s inner workings are private, one imagines this even-handed policy reduced the museum’s subsidy to the library, aggravating the overall budget problem.

Normative theory explains the growth trajectories of the organizations in the opening vignette. The Met and the NYPL tailored their revenue structure to the groups they served. The New-York Historical Society relied too heavily for too long on philanthropy. Normative theory suggests the Society defined its constituency too narrowly for its own good over the long-term.

This broad-brush examination is an example of peer-group analysis that answers the question, “Which sources of revenue are compatible with the kinds of goods and services we produce?” An organization can identify possibilities for revenue development by comparing how much of its revenue is derived from each source, and comparing the percentages with comparable information from other organizations with a similar mission and service-delivery method. This information is publicly available through GuideStar, and updated annually.

Figure 2: All Money Is Not Created Equal

Every income type is appropriate to a different provider/recipient combination. A good income portfolio reflects the mix of benefits it provides in addition to responding to “basic organizational challenges.”6 Normative theory is a sophisticated variant of resource dependency rooted in public finance, a branch of economics. The key is identifying the beneficiaries and matching them to revenue types:

Private benefits accrue specifically to individual consumers or clients who recognize the benefits and are willing to pay for the goods and services. Nonprofits producing private benefit goods should set a market price to cover cost of production; if mission dictates a price that does not cover cost, they should seek cross-subsidy or endowment income. (Example: the Met’s admission fees and its gift shop net income.)

Group benefits are collective goods that benefit a subgroup of society and are valued by donors interested in helping that subgroup. Values-centered management influences the choice of group and defines the benefits conferred. These types of goods and services are most likely to find support from specific groups of donors and organization partners. Endowment income and some targeted government funding programs are possibilities. (Examples: the Met’s appeal to art lovers and the NYPL’s appeal to researchers.)

Public benefits are collective goods that accrue to a sufficiently large segment of the general public such that government financing is politically supported. Unlike with group benefits, no particular group is favored. Widespread benefits attract government funding. (Example: the NYPL’s service to the community as an archive.)

Trade benefits are private goods acquired by institutions or groups. The key to growth may be finding the right income mix, which may in fact be a single source.