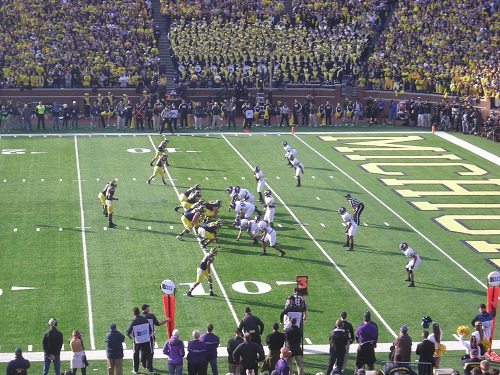 Led by quarterback Kain Colter, Northwestern University football players have won a huge labor organizing victory with the decision of the regional National Labor Relations Board that the players qualify as employees of the university and therefore can legally form a union. If the players now go through the process, the Northwestern University football team would be the first college athletes’ union in the nation.

It may be fitting that the NLRB gave the union green light to a football team nicknamed the “Wildcats.” At Northwestern, university administrators have pledged to appeal regional director Paul Ohr’s decision to the full NLRB in Washington, and then, if necessary, probably to the federal courts. To them, the Wildcats must seem like the Wobblies.

Colter’s College Athletes Players Association, helped throughout the process by the United Steelworkers, argues that the scholarships that the players get are the equivalent of payments to laborers—albeit chintzy, given the enormous profitability of college football. The university counters that the scholarships don’t equate to payments for the players’ labor, but are rather grants that pay for their education as student-athletes.

The implications are enormous.

“We frequently hear from student-athletes, across all sports, that they participate to enhance their overall college experience and for the love of their sport, not to be paid,” NCAA chief legal officer Donald Remy said in a statement. “While improvements need to be made, we do not need to completely throw away a system that has helped literally millions of students over the past decade alone attend college…We want student-athletes—99 percent of whom will never make it to the professional leagues—focused on what matters most—finding success in the classroom, on the field and in life.”

The idea that college sports isn’t a big business has just about no traction anywhere. A devastating scholarly piece by civil rights historian Taylor Branch published in 2011 is just one among scores of comprehensive demolitions of the “not-business” argument. The facts are pretty clear. College football in particular is a huge revenue source, generating well over $30 billion in revenues since 2000, more than the cumulative revenues of the next four highest earning college sports (basketball, soccer, baseball, and softball).

This year, the student-athlete myth was damaged by the revelations of a whistleblower at the University of North Carolina who studied 183 academically troubled student-athletes from the football and basketball program between 2004 and 2012 and “found 60 percent reading at fourth- to eighth-grade levels and roughly 10 percent below a third-grade level.” As is all too typical of other employers, the whistleblower was vilified by the school for exposing its phony classes and other academically fraudulent practices to keep the players playing regardless of how little they were getting educationally. UNC is hardly unique, and few people take the NCAA seriously on this score—but we all watch the NCAA basketball games in March and we all argue over the national championship in NCAA football without consciously acknowledging that the players on the field are, until they’ve exhausted their eligibility, as Ohr said in his ruling, actually university employees.

Navy running back Will McKamey, all of 19 years old, died this week while in a three-day coma after having collapsed during a football practice. He had suffered a head injury in high school, but had been cleared by four neurosurgeons who had administered CAT scans and MRIs toward getting him back onto the gridiron. College athletes regularly suffer career-ending injuries, but unless they get to the NFL or the NBA, they’re out of luck for the kind of work-related compensation they should have gotten as employees. Entirely in character with his behavior throughout the organizing effort, Colter tweeted after the NLRB ruling, “Shielding current and former players from sports-related medical bills should be guaranteed” and “Minimizing risk of concussions should be a priority.” It’s too late for McKamey, and too late for Colter and his colleagues, but future players might just get the protection they need and deserve.

Not all reactions toward Colter and his teammates have been positive. Tweets have appeared criticizing the players for their “greed” for asking for more than a free education. But those negatives have been countered by tweets congratulating Colter and the team from sports writers Dave Zirin (The Nation) and Kevin Blackistone (ESPN)—and from legislators such as Congressman Tony Cardenas (D-CA), who last year introduced H.R. 3545, the “Collegiate Student-Athlete Protection Act,” with the intention of accomplishing some of the protections that Colter and his allies have progressed with at the NLRB.

Remember, these private universities are nonprofits, at least by corporate tax status. Their nonprofit status, with the renaming of payments to student-employees as grants to student-athletes, didn’t give them any special considerations from the regional director of the NLRB. When all is said and done, Colter is a remarkable and surprising labor leader for collegiate athletes, but what he has achieved may well reverberate beyond college campuses.—Rick Cohen