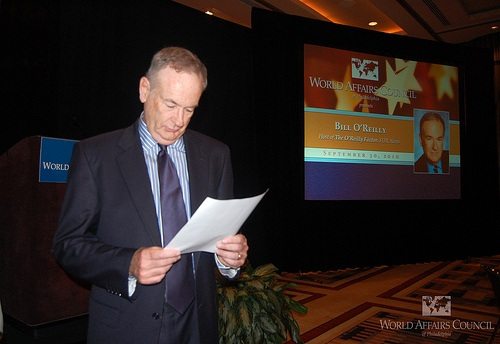 We were hugely disappointed that due to the crush of work at NPQ, we were not able to get to the first day of the Points of Light 2013 Conference on Volunteering and Service. Our main interest was in hearing Bill O’Reilly speak about volunteerism, accompanied by political cohort Karl Rove and odd bedfellows Donna Brazile and David Plouffe.

O’Reilly’s message, tracking the theme that Points of Light CEO Michelle Nunn articulated, is that volunteering is a patriotic act. “Volunteering is already a defining characteristic of what it means to be an American,” Nunn told USA Weekend. “To lift a hand for others and to be part of something that’s larger than yourself, that’s the essence of patriotism.” Citing his joint charitable activities with his liberal sparring partner, comedian Jon Stewart, O’Reilly wrote, “Helping others in this nation who are struggling isn’t just ‘the right thing to do.’ It’s the patriotic thing to do.”

Among the venues O’Reilly cited for his personal volunteerism were the Wounded Warrior Project, the Fisher House Foundation, and the Robert F. Kennedy Center for Justice and Human Rights, without regard of the politics of the organizations—noting, as he did, the largely Democratic composition of the board of the Robert F. Kennedy Center. Similarly, the fact that Michelle Nunn herself is rumored to be planning a run for one of Georgia’s U.S. Senate seats, like the one her father once held, wasn’t a concern for the generally conservative O’Reilly—although it did earn her a “prebuttal” from the National Republican Senatorial Committee.

The press coverage, at least through yesterday, didn’t have much on what these luminaries said from the dais, preferring to highlight pictures of Karl Rove taking Donna Brazile for a spin on the dance floor (as shown in Politico, the Washington Post, and TIME magazine). The substance of what’s been said is important, though; what happens in the political realm does affect the civic attitudes of Americans, and volunteerism is an expression of civic commitment. (This writer finds the references to patriotism a little jingoistic, as people who live in other countries also volunteer their time and energy to help each other, without all the flag-waving).

For example, Rove created and runs the nation’s largest “dark money” operation, Crossroads GPS, with a 501(c)(4) arm that has no discernible social welfare program functions. He, and others of the left and right with similar, albeit smaller, dark money machines, flout the tax code’s requirement that they do something related to social welfare in contrast to their partisan political engagement. This posture can only induce cynicism and distrust in America’s volunteers.

Lauding President Obama’s willingness to sign a Fisher House poster that O’Reilly could auction for charity, O’Reilly declared, “all presidents are patriots, after all,” with the corollary that patriots are committed to volunteerism. That hardly comports with O’Reilly’s insinuations on his TV show that the White House “concocted a scheme” to use the IRS to target conservative groups, in an abuse of executive power not seen since President Richard Nixon—whose impeachment and subsequent resignation stand as less-than-stunning examples of presidential “patriotism.”

Also not addressed in O’Reilly’s paean to volunteerism is the fact that many of the nonprofits for which ordinary Americans volunteer depend on government funding for their day-to-day existence. Even the Points of Light Foundation is not immune to the need for government support. According to USASpending.gov, the federal government awarded the Points of Light Foundation 73 grants or contracts between FY 2003 and FY 2013 that amounted to almost $38.9 million, 52 of which were from the Corporation for National and Community Service.

“We must take politics out of compassion,” O’Reilly wrote. That’s a difficult plan to follow if the nonprofit infrastructure through which volunteers serve is starved for basic resources, which cannot be wholly replaced by volunteers’ commitment and energy, no matter how passionate they are. Perhaps that is why Nunn is mulling a Senate run despite being denounced by the NRSC as “to the left of Barack Obama.”—Rick Cohen