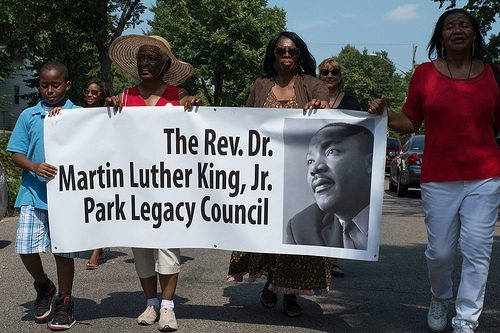 Not on either dais were conservative black leaders, who complained at a gathering sponsored by the Republican National Committee that their voices and message haven’t been in evidence during the 50th anniversary events. To them, as described by Niall Stanage in The Hill, “the left is appropriating the Rev. Martin Luther King Jr.’s memory and willfully understating the degree of progress the United States has made in overcoming the egregious racial injustices that characterized an earlier era.”

Among the speakers at the RNC event were Mia Love, a black conservative who is the Republican mayor of Saratoga Springs, Utah, who decried the modern-day civil rights’ activists’ alliance with the Democratic Party and their de-emphasis on personal responsibility and economic independence in favor of their message, as she phrased it, that the “only hope for a better future is a government handout,” even though, Love contended, “it does nothing but keep black Americans dependent.”

Overall, the RNC event didn’t get much attention and was largely disparaged in the media except for the 10-minute presentation by Robert Woodson, the founder and CEO of the nonprofit National Center for Neighborhood Enterprise. Regardless of political differences liberals might have with Woodson, there is no question that he has the personal track record of having dealt with social and economic injustices in the black community, enabling him to speak about issues with credibility and to challenge fellow conservatives for their lip service to black concerns.

Woodson’s brief speech attracted an enthusiastic response from the RNC luncheon crowd, which apparently didn’t warm much to the other speakers, and garnered some press attention for comments such as these.  “We must be honest about those black politicians who are standing on those who sacrificed and are using that position for corrupt purposes,” Woodson said. “We need to call them out, because they are moral traitors. They are moral traitors. But we’re silent about that.” That might have been a swipe at politicians such as Jesse Jackson Jr. who was recently sentenced to a term of 2.5 years for misappropriating campaign funds for personal use or perhaps a swipe against some civil rights leaders who, like Jesse Jackson Sr. and Rev. Al Sharpton, have been controversial in their own rights.

Writing for the Daily Beast, Ben Jacobs described the RNC event as a “comedy of errors,” highlighting what he called Woodson’s “gaffe” statement that “everybody has come in front of them [poor blacks] on the bus. Gays, immigrants, women, environmentalists.” Woodson got a standing ovation from the otherwise quiet crowd when he added, “We should not wait for evil to wear a white face before we get outraged.”

Maybe some alternative voices in the mix during this past week might have been useful, perhaps economist Thomas Sowell or former Democratic Congressman, now self-described “center-right” Republican, Artur Davis of Alabama. They would have been more credible conservative voices than Oklahoma’s T.W. Shannon who, as reported by Dana Milbank in the Washington Post, regaled the RNC gathering with an attack on the nation’s “ferocious appetite for bigger government,” a call for protecting the nation against the “contaminants of government dependence, class warfare, socialism and any other pollutant that would muzzle the ring of freedom,” and a story about a woman in Alaska who beat a moose off her husband with a shovel.   They might have been more credible, with sufficient gravitas, than Herman Cain, who called President Obama’s track record on race relations “lousy” at the RNC luncheon.

Woodson would have been interesting as a speaker, but not, as Milbank wrote in the Washington Post or Jacobs in the Daily Beast to show the Republicans’ attentiveness to the message of Rev. Martin Luther King, Jr.  Rather, Woodson’s audience is the conservative movement itself. He might have been counted on to try to shake conservatives out of their race torpor to understand the issues that they have put in the back of the bus. —Rick Cohen