Black Parkland Students and the Illogic of Racism 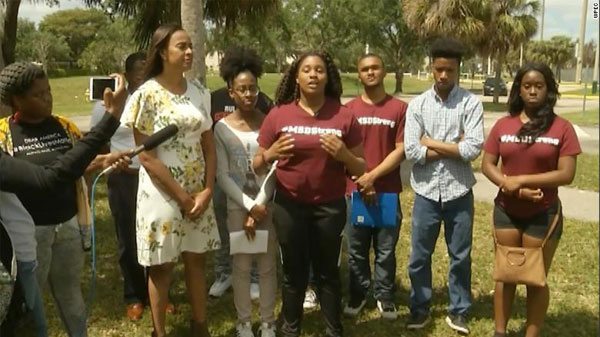 Black students at Marjory Stoneham Douglas High School held a press conference last week to tell the world that the response to the February shooting—increased school policing—does not make them safer and, in fact, harms them.

NPQ wrote earlier last week about the problem with solutions that center the experiences of the most privileged in a system—in this case, white students. Now, we hear directly from the students of color; one of them, Kai Koerber, a junior, tells CNN, “The police are making their own rules and are turning our school into a police state….Students of color, black and brown students, like myself have been racially profiled while we are on heightened alert, fearing the emergence of another Caucasian shooter.”

So, even though we are on alert for another white shooter, black and brown students are being profiled? Such is the illogic of racism.

People of color have the paradoxical experience of being simultaneously invisible and hypervisible. No one is intentionally excluding the students of color, but not including them leads to a solution that makes them a target—not because they resemble the potential perpetrator, but simply because they are suspect a priori. Vox describes it this way:

A 2014 fact sheet from the Department of Education’s Office for Civil Rights noted that, during the 2011-2012 school year, black students were suspended and expelled from school at a rate more than three times greater than white students. When broken down by race and gender, the OCR notes that black girls are suspended at six times the rate of white girls and at twice the rate of white boys.

Collectively, this disparity fuels what has been called the “school-to-prison-pipeline,” a systemic bias that civil rights advocates say pushes children and young adults of color out of the classroom and into the criminal justice system.

According to the Herald’s Alex Harris, “Rev. Rosalind Osgood…said Kai’s comments are exactly why black students’ voices need to be elevated. Without this conversation, she said, she would have never thought of that consequence of heightened police staffing.”

Harris quotes, Tiffany Burks, a local Black Lives Matter organizer who helped the students organize the event, as saying, “Including black students in the gun violence conversation means broadening the topic from mass shootings to police-involved shootings.” This simple inclusion would in turn jumpstart a more inclusive set of solutions.

See how designing for the margins works?—Cyndi Suarez