March 24, 2011; Source: Foreign Policy | The McKinsey Global Institute has issued a fascinating report about how our world is changing.  The mix of cities that will be the “engines of global economic growth” in the future is going to change.  The new cities becoming leading urban centers—economically as well as in terms of population numbers—are all from the developing world, as the developed world recedes in its economic influence and dominance.

Some of the factoids are compelling:  Half of the world’s population lives in cities, and cities account for 80 percent of global GDP.  McKinsey says that the pace of urbanization is such that the urban population increases by seven Chicagos every year.  The McKinsey people suggest that we can’t be “country-specific” in our thinking any more, we have to look at conditions and issues with a more “granular” approach.  They note that all of the new economic powerhouses will be from “developing regions,” though at this stage, it’s sometimes hard to think of Shanghai and Beijing (#3 and #5 in GDP, #1 and #2 in GDP growth in 2025) as developing.

Indeed, 11 of the top 12 cities in GDP growth will be from China.  The balance is shifting to the developing world, particularly Asia.  By 2025, one out of every three developed world cities in the top 600 in terms of GDP will drop off the list.  Replacing them will be 100 from China and 13 from India.  The key isn’t rising GDP, but GDP per capita.

Is this important to nonprofits (and all of us as citizens of the world)?  Yes, for a reason we suspected and McKinsey confirms, that the pressures for revolutionary social change, as we have witnessed recently in the Middle East, “start in cities, not in the countryside.”  The political upheavals in Tunisia, Egypt, and other nations have  been driven by urban unrest, prompted by unemployment, high gas and food prices, and other economic factors.

Mexico City will be #20 in GDP, Doha #2 in GDP per capita, Mumbai #2, Delhi #5, Kolkata #6, Dhaka #7, and Mexico City #9 in population, and Kinshasa, Karachi, Dhaka, Mumbai, Kolkata, Lagos, and Delhi #s 1-7 in number of children.  These global urban economic changes will change the dynamic of needs and power in developing cities—and change the prospects and expectations of populations in the cities that are going to fall off the lists of global economic engines.  Food for thought.—Rick Cohen 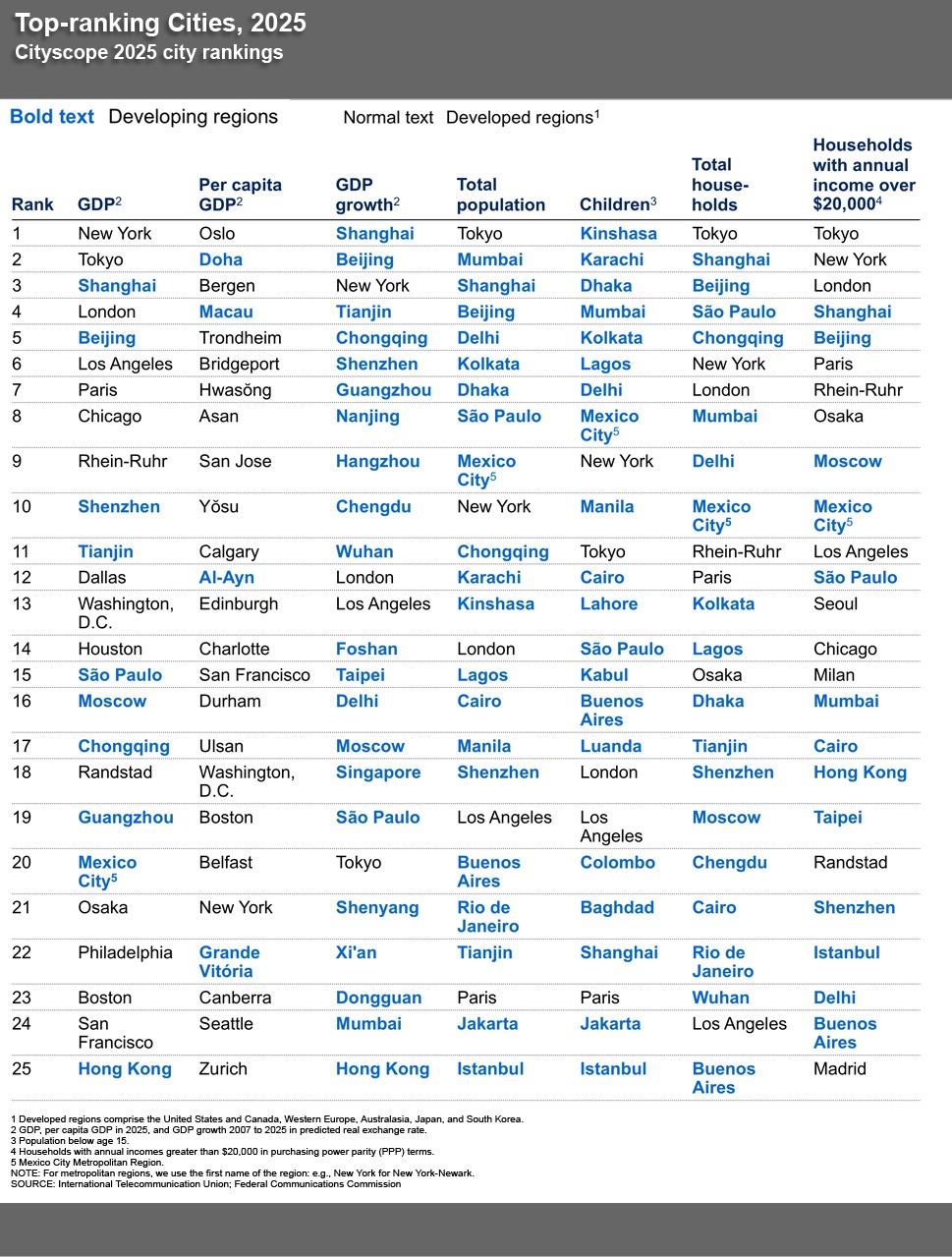