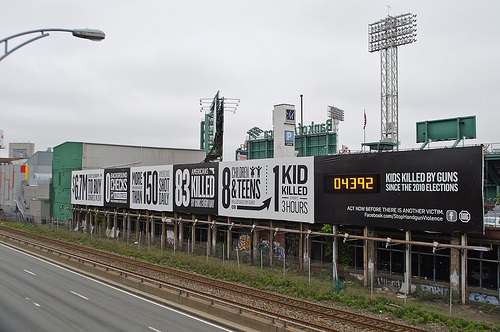 John Rosenthal, a high profile developer in Boston, is also the co-founder of a nonprofit called Stop Handgun Violence that for the past twenty years has sponsored a massive anti-gun violence billboard next to the Massachusetts Turnpike as it heads into Boston. The digital sign is 252 feet long and is installed on the side of a parking garage owned by Rosenthal. Or formerly owned by him; it is now owned by the Red Sox organization, which plans to take the sign down.

Rosenthal will eventually replace it with another digital display of similar proportions on the Fenway Center Complex, which will extend over the highway, but in the meantime the state will be “saturated” with many smaller displays on billboard space donated by Clear Channel, Logan Communications, Total Outdoor, and Outfront Media, Rosenthal said. All but four of the 36 signs will be on digital displays and will read, “We’re Not Anti-Gun. We’re Pro-Life. Massachusetts Gun Laws Save Lives.” Each will show a Bushmaster XM-15 assault rifle with a white surrender flag poking out from the barrel.

Rosenthal is committed to the size and placement of what has become an iconic part of the Boston scene. “We are going to come back with a big, permanent billboard that will continue to keep this debate alive for the rest of time. There’s potential for the billboards to be the first and last thing you see coming in and out of Boston.”

Stephen Ross, president of the Boston division of Clear Channel Outdoor, said, “When we realized he would no longer have his…billboard to get out the message about gun control, we offered to utilize some of our space. It was easy for us to make a huge impact on such an important message.”—Ruth McCambridge