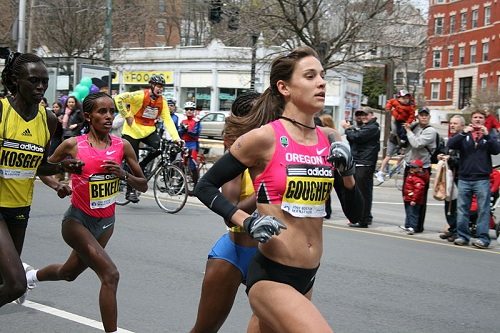 Today, runners from all over the world are competing in the Boston Marathon, a race with a charitable footprint that goes back more than 100 years, but some charity runners are finding the race’s fundraising minimum as challenging as the race itself. As the Boston Globe recently reported, the charitable focus of the race took off in 1909 in response to a historically devastating earthquake in Italy that killed more than 100,000 people. The marathon raised hundreds of thousands of dollars for the relief effort. These days, 31 charities—from the Dana-Farber Cancer Institute to the Boston Museum of Science, among many others—are beneficiaries of money raised through the Boston Marathon, according to the website of the Boston Athletic Association, the nonprofit that organizes the marathon as its most well known annual event.

The Boston Globe presents an interesting infographic that documents the marathon’s charitable impact in recent years and which showcases the recent growth in charitable impact per runner; in 1994, 500 charity runners raised an average of $1,547 each, but in 2011, 2,285 charity runners raised an average of nearly $7,000 each. Overall, the marathon raises “more than $10 million annually [for] areas of need within Greater Boston,” according to the Boston Athletic Association. Around the time of the 1909 earthquake relief marathon, an article in the Boston American called the race “the first marathon ever held for charity” under a headline that read, “Charity the Biggest Prize of Marathon.” While many aspects of the Boston Marathon have changed over the years, including the course itself and the length of the race, it’s heartening to know that, more than 100 years later, that sentiment continues on today.

However, some runners participating in the marathon are finding the new fundraising minimum—upped to $4,000 this year despite a sputtering economy—more of an endurance test than they had expected. Runner Allison Buzzell, for example, reports that she is having a hard time raising the $4,000, and the stress that this causes is exacerbated by the fact that “most charities take runners’ credit card numbers, meaning that if a runner does not raise the required amount, blisters may not be the race’s only lasting pain,” as the Worcester Telegram & Gazette recently put it. “The charities can—and often do—charge the runners’ cards.”

“If I have to give money, it’s going to a great cause,” said the 25-year-old Buzzell, who is running for the Doug Flutie Jr. Foundation for Autism but was approximately $1,700 short of the $4,000 minimum as of a week before the race. “But on the other hand, I don’t make that much money,” Buzzell says.

Perhaps it is fitting that fundraising associated with the Boston Marathon, a grueling physical slog for many, has become such a challenging test. In each case, it seems “no pain, no gain” applies. –Mike Keefe-Feldman