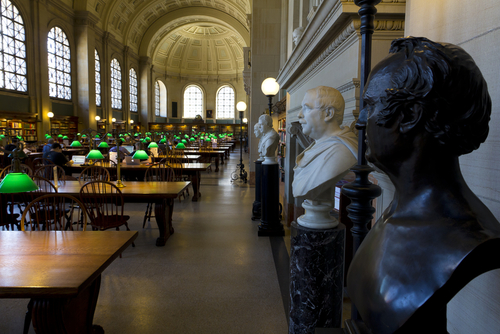 After a damning audit calling for changes to the Boston Public Library’s management of its special collections following the disappearance of two art prints, Boston Mayor Marty Walsh has said he is concerned there may be more revelations to come of missing work from the library’s collections.

“The lack of security…really concerns me greatly that there are other things missing,” Walsh said on Boston Herald Radio’s Morning Meeting show Monday morning. “It could be worth a lot of money for the city of Boston, but more importantly [there’s] the historical value.”

Walsh described his role in the ordeal as being one to “push for change, reform.” He goes on to say, “I think this agency needs to look at reforming their processes and safety procedures, and not just that, but making sure we know what we own and is in our possession.”

Since the BPL is a separate state agency, it has its own board of trustees, which will be meeting Wednesday at Walsh’s request.

As indicated in the audit and reiterated by Walsh in the interview, these measures are being taken in order to improve the services and ensure these mistakes are not made again. According to Walsh, the goal should not be to minimize bad press at the expense of acting in the public’s interest, which involves properly protecting the library’s valuable collection.

“The audits aren’t there to say ‘gotcha.’ The audits are there to find where the holes might be and then to fix those problems that are happening.”

As more and more stories emerge about other potential disappearances and almost-disappearances, the mayor’s concerns may indeed be legitimate. Last week, the Boston Herald reported and NPQ commented on the story of an employee from the library giving away a historic pamphlet from 1800 worth $19,500 to a book sale. The organizers of the book sale, the nonprofit City-Wide Friends of the Boston Public Library, brought the mistake to the attention of the library, which confirmed the error and took the pamphlet back.

This past Friday, a retired library employee who continues to volunteer came forward alleging that gold coins that had once been placed in the cornerstone of the Copley Branch’s McKim building have been missing for decades. The coins had been placed in a time capsule back in 1888, which was opened in the 1990s, but it’s unclear what happened to the contents of the capsule.

“Based on his limited information, it is our estimation that these items went missing several decades ago,” BPL spokeswoman Melinda Shuler said. “It is perplexing why this is only being shared now with library administrators, but we are taking this inquiry seriously.”

In light of these accusations, BPL has had to seriously scrutinize its handling of its special collections, which the city-commissioned audit indicates left them open to theft. The Herald also reported over the weekend that BPL had consulted with the Museum of Fine Arts in 2012 to generate a security report on best practices and measures to safeguard their works. It’s unclear whether these recommendations, if any, were implemented, as the library has so far refused to make the documents available. Mayor Walsh says that is a mistake and that the report will be released “hopefully some time next week.”—Shafaq Hasan

Libraries Are Open Even When Shut