Boycotts; They Still Got It! Chick-fil-A Reportedly to Stop Funding Anti-Gay Groups 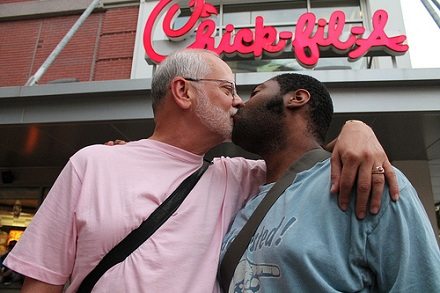 The Civil Rights Agenda, an advocacy group dedicated to LGBT issues has released a statement announcing that Chick-fil-A has agreed to cease its funding of groups opposing gay marriage.

Last summer the company ran into a firestorm of protest against its funding of those groups as well as the public statements against gay marriage made by a company spokesperson. The protests were online and offline and included a “kiss-in” at the shops. It also drew in elected officials in Boston and Chicago who vowed to block the company’s expansion plans.

On the other side, former Arkansas Governor Mike Huckabee organized fans of the company’s position to take to the streets waiting in long lines to purchase a sandwich in support of their anti-gay position, or their right to hold an anti-gay position.

While the company hasn’t confirmed or denied the change in charitable policy, the statement from CRA informs us that the charitable arm of the company “is now taking a much closer look at the organizations it considers helping, and in that process will remain true to its stated philosophy of not supporting organizations with political agendas.” CRA is still pushing for additional concessions to the company’s human resources policies. –Ruth McCambridge