BPL Chief Forced Out of Office, But Exits with Real Style 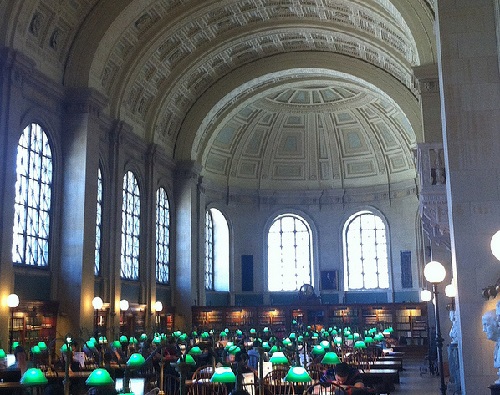 If I were going to be forced out of office, I think I would like it to happen in the same way as it has for Amy Ryan, who until a few days ago was the president of the Boston Public Library. First of all, she was vindicated right after resigning. Secondly, she was staunchly defended by world-class authors.

Ryan, of course, was essentially forced out of office when Boston’s mayor, Marty Walsh, reacted in what can only be called a hysterical way to the news that two pieces of art were missing. Let’s keep in mind that the BPL has a total of 23 million items to keep track of. The artwork—a 1634 Rembrandt etching valued at up to $30,000 and a 1504 Albrecht Dürer engraving valued at $600,000—was misfiled, but eventually located by library employees in the very room where they were supposed to be.

Walsh is clearly not about to offer reconciliation. The trustees of the library, however, take a different view. “I think it sucks, frankly, that Marty accepted her resignation and doesn’t seem open to reconsidering,” wrote Dennis Lehane (Mystic River), a former library trustee, to the New York Times. “It depresses me to know she’s no longer running that ship.” And James Carroll (Constantine’s Sword: The Church and the Jews, A History), also a former trustee, emailed the Times to say that Ryan’s leadership had been “a high-water mark for public servants in Boston.”

Carroll noted that Ms. Ryan remained professional throughout the high profile flap. “Sadly, City Hall, and Mayor Walsh in particular, failed to match Amy’s calm, indulging in hysteria and prejudgment that made things worse, not better,” he wrote in his email, adding that Walsh’s “scapegoating” of Ms. Ryan “made her continued tenure impossible.”

Ryan herself seems to be taking the whole thing with grace. “The timing wasn’t exactly what I had planned, but I have a lot of interests I want to pursue.”

She hopes to make her retirement look so appealing, writes Katharine Q. Seelye of the Times, that her friends would respond like those of Madeline (from the children’s books by Ludwig Bemelmans) after she has her appendix out; they get so jealous of her flowers, candy, and her scar that they cry, “Boo hoo, we want to have our appendix out, too.”

On the other hand, Mayor Walsh, in this author’s opinion, has embarrassed himself with his overheated rhetoric, and maybe lost a bit of credibility.—Ruth McCambridge