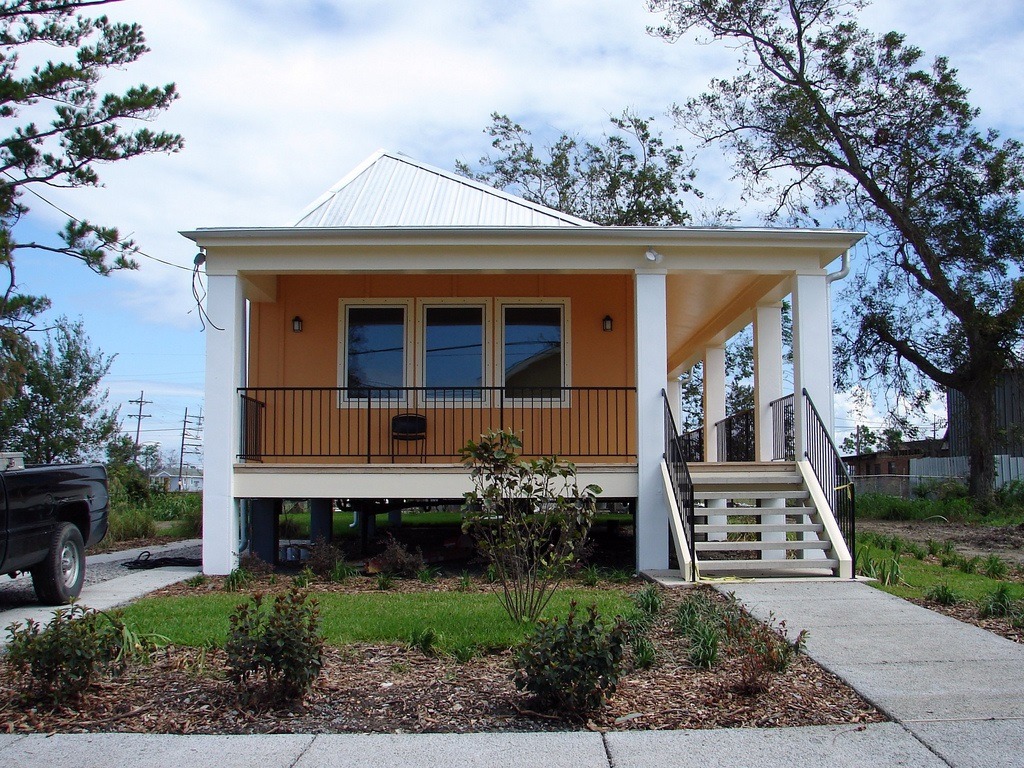 It’s been ten years since Hurricane Katrina devastated New Orleans, leaving more than 1,800 dead across the region, displacing 400,000, and resulting, by some estimates, in $150 billion to $200 billion in damages.

According to the Greater New Orleans Data Center, the storms and flooding damaged more than 134,000 housing units in New Orleans alone, or 70 percent of all occupied units. As NPR reported on Monday, more than 5,000 families lived in public housing pre-Katrina. Today, that number is less than 2,000, and the waiting list for subsidized housing is 16,000.

One of the highest profile responses to the widespread homelessness was Brad Pitt’s Make It Right Foundation, which, since 2008, has been working on its goal to build 150 homes for low-income families wishing to return to the city’s Lower Ninth Ward. One of Make It Right’s primary goals is to provide high-quality, eco-friendly housing to families in need, and the homes have been recognized for their LEED Platinum certification and so-called “cradle to cradle” principles, which make full use of water conservation methods and solar power.

Make It Right has spent $26.8 million to build 109 homes to date, and a fundraising video on its website states that with each home built, the organization is learning valuable lessons about how to change the “low cost, low quality paradigm.” According to spokeswoman Taylor Royce, the average per-unit building cost is between $180,000 to $220,000, down from the first prototype costs of $245,000. With a sales price of $150,000, the houses are presently sold at a loss.

In contrast, albeit thanks to an extensive volunteer network, a long history in the city pre-dating Katrina, and built-in sweat equity on the part of its homeowners, New Orleans Area Habitat for Humanity has built more than 500 homes since 2006 at an average cost of $85,000 per unit. In 2006 and 2007, New Orleans Area Habitat was the largest homebuilder in the state; in one year alone, more than 150 homes were constructed. (Prior to the storm, the group averaged 10–12 houses per year.) In late 2005, Harry Connick, Jr., and Branford Marsalis brainstormed with Habitat and came up with the idea for Musicians’ Village, consisting of 72 single-family homes, five duplexes, and a toddler-friendly park, all anchored by the Ellis Marsalis Center for Music.

As chief advancement officer Marguerite Oestreicher wryly put it, “We were really busy.” Recognizing the thousands of volunteers who reached out to Habitat in the months and years following the hurricane, she added, “When something this big happens, you find out what strength of community really is.”

As pointed out in an article by David Uberti in The Guardian last month, the housing market in New Orleans remains tight, and competition for the city’s diminished housing supply has seen median gross rents rise. Other costs of living, such as flood insurance rates, have likewise risen.

Oestreicher and I spoke about the challenges and array of stakeholders involved in post-Katrina building, and she observed that government’s biggest accomplishments have been in the kind of sophisticated, mixed-use developments that, in addition to single family and higher density housing, can offer the kinds of neighborhood amenities that turn neighborhoods into communities. There will presumably be more investment in this kind of model. New Orleans is a HUD Choice Neighborhood recipient as well as part of the Rockefeller Foundation’s 100 Resilient Cities Challenge, which, among other things, offers access to influencers and innovative ideas from the government, private and nonprofit sectors.

While experimental projects such as Make It Right have made (expensive) baby steps in rebuilding the Lower Ninth Ward, much more work remains to restore the neighborhood’s population to even a semblance of its pre-Katrina levels. According to The Data Center, while more than half of New Orleans’s 72 neighborhoods have recovered over 90 percent of the population they had before the levees failed, four neighborhoods have less than half the population they had prior to Katrina. One of these, the Lower Ninth Ward has only 37 percent of its pre-Katrina population.

As reported by Richard Thompson in the New Orleans Advocate, the next step, according to Pitt, is improving access to grocery stores in the Ninth Ward. However, without the population density required to make it profitable, those types of stores—along with banks, laundromats, restaurants, bookstores, and all the other retail establishments that make for an interesting Main Street—will find few incentives for making the investments required to build a viable business district.

I asked Oestreicher what she thought of Pitt’s work, and she spoke favorably. “People of modest means should still be able to have beautiful places to live. Katrina was bigger than FEMA, bigger than local government, bigger than any neighborhood. And New Orleans would not be where it is today were it not for all of the volunteers wanting to do their part.”

As for Pitt himself? He and his wife have put their French Quarter home on the market and may buy another home elsewhere in the city in time.—Patricia Schaefer