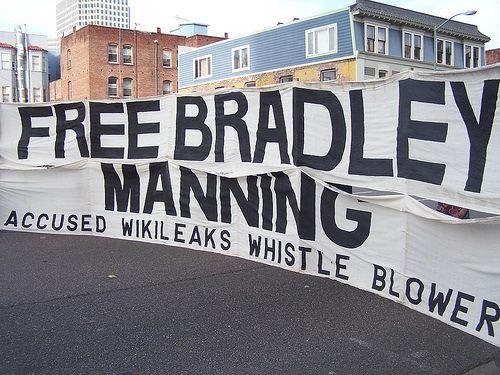 Let’s have a vigorous debate on this story. Harvard professor Yochai Benkler has some challenging thoughts about transparency, whistleblowers, and Private Bradley Manning. Last week, Manning admitted to giving classified materials to WikiLeaks. Benkler questions whether Manning should have been charged at all. Benkler, an expert witness at the trial, quotes military court judge Col. Denise Lind as asking prosecutors whether they would have gone after Manning had he leaked information to the New York Times rather than to Julian Assange’s WikiLeaks. The prosecution reportedly assured the court that they would have done so. Benkler says that this argument “makes the Manning prosecution a clear and present danger to journalism in the national security arena.”

Do you agree? Is press freedom at risk? Benkler reminds his readers that Daniel Ellsberg was “prosecuted, smeared, and harassed” for his disclosure of the Pentagon Papers. In retrospect, however, Benkler asserts that “we express pride in a man’s willingness to brave the odds, a newspaper’s willingness to take the risk of publishing, and a Supreme Court’s ability to tell an overbearing White House that no, you cannot shut up your opponents.” Is the Manning case a reversal of the lessons of Ellsberg?

Benkler writes, “Freedom of the press is anchored in our constitution because it reflects our fundamental belief that no institution can be its own watchdog.” Regarding government’s calls for making much of its work secret, Benkler acknowledges that secrecy may be necessary and justified in many places, but he argues, “as hard-earned experience has shown us time and again, it can be—and often is—used to cover up failure, avarice, or actions that simply will not survive that best of disinfectants, sunlight.” That’s why Benkler sees the role of whistleblowers as important. He describes the whistleblower as “a pressure valve…fueled by whatever moral courage they can muster.”

Manning was charged not just with leaking classified information, but also with “aiding the enemy,” which is potentially punishable by death. If Manning is guilty on this count, might Ellsberg, Benkler wonders, have been guilty of aiding the North Vietnamese and the Viet Cong? Is Manning guilty of giving information to the man, Assange, who Vice President Joe Biden called a “high tech terrorist?” Or is Manning’s leak to WikiLeaks comparable to Ellsberg’s leak to the New York Times?

Benkler notes, “[F]or 150 years, well before the rise of the modern First Amendment, the invention of muckraking journalism, or the modern development of the watchdog function of the press in democratic society, no one has been charged with aiding the enemy simply for leaking information to the press for general publication.” Is giving classified information to WikiLeaks or the New York Times aiding the enemy and, as such, a capital offense? Might that have some impact on the potential willingness of future whistleblowers?

What do you think? Is Manning is a traitor, guilty of espionage for leaking secrets that aided the enemies of the United States? Or is Manning a whistleblower who gave classified information to the press (in this case, WikiLeaks)? –Rick Cohen