#BringBackOurGirls: For All Who Care about the Fate of Women in the World 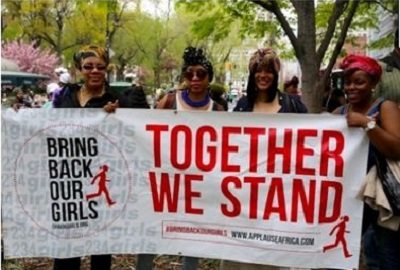 John Aravosis, the editor of AMERICAblog, writes that CNN and other news outlets, absorbed with multiple stories every day about the lost Malaysian airline flight, ignored the story about the 300 schoolgirls kidnapped by the Boko Haram terror group because “no one cares,” or more accurately, because CNN and other outlets are “giving their audience what it wants.” The release of a video allegedly showing the head of Boko Haram laughing through a statement threatening to sell the girls for sex has within the last couple of days vaulted the Nigerian kidnapping story nearly to the level of the coverage of MH370.

The story is horrifying, as the creep heading Boko Haram giggled that Allah wants people to be sold. It is, of course, striking that Islamic extremists in Nigeria, Afghanistan, and Iraq (where the government has proposed lowering the age of marriage to nine or, according to the lunar calendar, even less) seem to always take as their first actions the domination and suppression of women, a classic statement of men who feel oppressed and intimidated by the world around them.

Nigerians are the largest contemporary African immigrant group in the U.S., and various nonprofits representing Nigerians in the U.S. are trying to wake the American public up to the unbelievable dreadful events that have engulfed these young women and their families, largely ignored by the feckless government of Nigerian president Goodluck Jonathan (whose wife, Patience Jonathan, reportedly ordered the arrest of the leader of the protesters in Nigeria calling for more action against the kidnappers). According to Nicole Lee, until recently the head of the D.C.-based nonprofit TransAfrica, protests supporting the hashtag campaign #BringBackOurGirls have been held around the world in recent days, including in New York City and Washington, D.C., led by first- and second-generation Nigerians. Nigerians and others protested in the streets of Houston, Los Angeles, and other cities across the country against the abduction and sale of the girls, most of them between the ages of 15 and 18, from their school in Chibok.

Those grassroots protests might have captured some of the attention of the major U.S. news outlets, but what might be making the abductions, which occurred back on April 15th, suddenly current is the World Economic Forum, which is scheduled to be held in Abuja, Nigeria, between May 7th and 9th. Instead of chasing the Boko Haram kidnappers, the government of Goodluck Jonathan is making security arrangements for the 1,000 or so business and government luminaries who will descend on Abuja. The Nigerian government doesn’t want to see Boko Haram disrupt the WEF program, much less kidnap its participants.

Already on a trip to Africa that will probably end in a stop-off at the WEF, U.S. Secretary of State John Kerry pledged U.S. assistance to Nigeria in finding the 300 or so kidnapped girls, promising, with no details, that the U.S. “will do everything possible to support the Nigerian government to return these young women to their homes and to hold the perpetrators to justice.” Secretary Kerry undoubtedly means well, but prior U.S. pledges to help Syrians being pummeled by forces of Bashar Assad, Ukrainians being bullied by the government of Vladimir Putin, and Sudanese and South Sudanese being attacked by nearly everyone haven’t exactly panned out well enough to give Nigerians much hope about U.S. aid.

Imagine if a homegrown group of nuts had kidnapped three hundred high school kids here in the United States. Life would come to a halt until a nationwide dragnet dredged up the criminal perpetrators. But, if we may be so bold as to say so, these are girls in northeastern Nigeria. The Nigerian government lied that most of the girls had escaped, Patience Jonathan has insinuated at times that there had been no kidnapping, and the Boko Haram is far from being comprehensible to ordinary Americans (see the snippet of the videotape on CNN here), and this nation doesn’t get much involved in humanitarian crises in Africa—witness Darfur, South Sudan, the Central African Republic, and the horrific genocide in Rwanda.

One person above all knows personally about the violence and hatred unleashed by Islamic extremists against women, particularly young women trying to get the kind of education that the name “Boko Haram,” in a Hausa dialect, calls sinful. “These abducted schoolgirls are my sisters and I call on the international community and the government of Nigeria to take action and save my sisters,” Malala Yousafzai, the young girl shot in the head by the Pakistani Taliban,wrote in an e-mail to New York Times columnist Nicholas Kristof. “It should be our duty to speak up for our brothers and sisters in Nigeria who are in a very difficult situation.”

The fate of 300 Nigerian schoolgirls in northeastern Nigeria might not get the ratings of the months-long coverage of the search for Malaysian Airlines’ Flight 370, which disappeared on March 8th, but the girls deserve massive and intense international attention because their kidnapping is an attack on all women, just as Malala said.—Rick Cohen

Addendum: This morning, Reuters Africa reports that gunmen suspected of having affiliation with Boko Haram have kidnapped eight more girls from the village of Warabe in northeastern Nigeria.