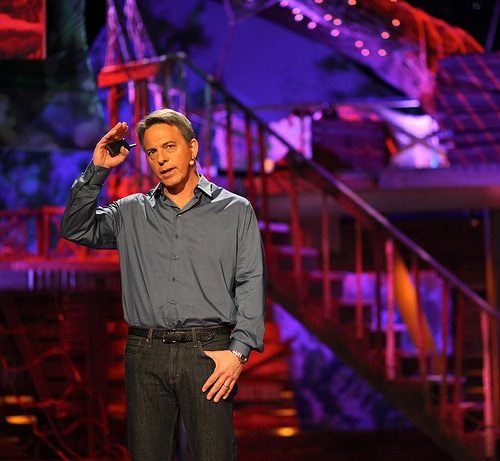 NPQ made a number of errors in editing this newswire. First, we would like to make it clear that Brian Mittendorf did not in any way “sling tomatoes” at Dan Pallotta in his excellent piece, “Do Nonprofits Really Limit Advertising Because of Pressure to Cut Overhead?” An editing error originally indicated that he had, but in fact he and Dan engaged in a very respectful dialogue on our site regarding the information advanced in Mr. Mittendorf’s article. Additionally, there was a sentence in the original copy of this newswire that read, “[Pallotta] came under sharp criticism eleven years ago when it became known that his business was keeping as much as 86 percent of the funds raised for events such as AVON Breast Cancer 3-Day walks and AIDSRides-USA.” This should have read, “When it was alleged by some”—and ideally we would have presented the alternate explanation of the situation. We have made these corrections below. We also apologize to the newswire writer, Jennifer Amanda Jones. These editing errors were in no way her responsibility. We deeply apologize for them, and have extended to Dan the opportunity to respond to criticisms in a feature article of his own.

As of this writing, Dan Pallotta’s TEDTalk “The Way We Think About Charity is Dead Wrong” has been viewed approximately 2.5 million times and generated significant discussion on social media. Responses to this talk can be grouped loosely into two camps. There are those that have drunk the “Pallotta Kool-Aid“ and herald him as the savior of nonprofit overhead. Indeed, he argues persuasively (and correctly) that overhead is necessary to the long-term growth of nonprofit organizations.

Then, there are those like Brian Mittendorf who have taken on disproving parts of Pallotta’s argument, and those throwing the social media equivalent of tomatoes at the man who seems to have taken as much from the sector as he has given, if not more. Pallotta’s for-profit fundraising business, Pallotta TeamWorks, describes itself has having “created the multi-day, four-figure pledge minimum charitable fundraising event category.” He came under sharp criticism eleven years ago when it was alleged by some that his business was keeping as much as 86 percent of the funds raised for events such as AVON Breast Cancer 3-Day walks and AIDSRides-USA. According to an article written on Common Dreams in 2002, Wayne Turner, an AIDS activist, went so far as to say, “People are beginning to wake up to the fact these AIDS rides are not about raising money at all. They’re about building Dan Pallotta’s empire, which is now crumbling.”

(For his part, Dan Pallotta says that he has encountered and responded to criticisms like those in the Common Dreams article before. He has a sharply different analysis of the cost structure of Pallotta Teamworks’ fundraising activities and their benefit to the charities he raised money for, including a spreadsheet that shows his firm’s presentation of results fundraising events between 1994 and 2002. The spreadsheet shows donations from or through the participants in the events of $556.1 million, overall charitable dollars raised of $582.4 million, participation support expenses of $115.6 million, marketing/cause awareness/administration expenses of $136.7 million, production fees for Pallotta TeamWorks of $23.4 million, and a total of $305.6 million retained by the charities for possible charitable use—approximately 55 percent of the “donor dollars remaining for the cause after event expenses.”)

A decade later, it seems that Pallotta is building a new empire. His books and TEDTalks are certainly generating hype. His main topic—nonprofit overhead—is an important one. But are his ideas on target? Phil Buchanan has offered one of the few substantive, more-than-just-a-tomato-in-your-face critiques of Pallotta’s argument. Here is a brief summary of Buchanan’s responses to Pallotta’s arguments:

Pallotta’s argument: The nonprofit sector has failed because issues such as breast cancer, homelessness, and poverty still exist. If nonprofits were larger and more robust, these issues could be resolved.

Buchanan’s response: “It’s absurd to cite the fact that social problems persist as evidence of the nonprofit sector’s failings; indeed, it’s fair to ask, how much worse might they be without the work of nonprofits?” And what about the role of government?

Pallotta’s argument: Low pay in the nonprofit sector affects employee performance. Nonprofits should increase employee pay and should look the incentive pay model in the corporate world as an example.

Buchanan’s response: “I agree that nonprofit CEO pay is frequently lower than it should be (and occasionally higher than it should be). But not let’s look to corporate pay as a model when the gap between the highest and lowest paid in corporations has widened so dramatically—and when corporate CEO pay is so often utterly disconnected from actual performance. Moreover, Pallotta either ignores or is oblivious to the increasingly rich body of research that suggests that pay is in fact not a key driver of motivation and performance. (See, for example, Daniel Pink’s Drive.)”

Pallotta’s argument: Giving has remained a relatively flat percentage of GDP in large part because nonprofits are not good at marketing.

Buchanan’s response: “In his history of American philanthropy, Olivier Zunz describes how nonprofits have mobilized mass participation and action for positive effect in the fights against disease. He also describes the successful campaigns to encourage giving that accompanied the birth of the “community chest” and the community foundation, and the “democratization” of philanthropy. Indeed, the country’s high level of charitable giving relative to other countries is the result of savvy marketing by nonprofits.”

Pallotta’s argument: The percentage of an organization’s total budget spent on overhead is not a good measure of effectiveness.

Buchanan’s response: Buchanan agrees that overhead expenses are not necessarily a good measure of overall effectiveness. But, at the same time, argues that overhead is an important measure to pay attention to. “Donors have a legitimate interest in understanding what proportion of their dollars ends up in the hands of for-profit fundraising professionals. A recent, widely discussed investigative report by The Tampa Bay Times and the Center for Investigative Reporting (CIR) identifies “America’s Worst Charities” on the basis of the proportion of funds raised that were paid to for-profit solicitors. (Topping the list is the “Kid’s Wish Network” which raised nearly $128 million over the past 10 years—$110 million of which went straight to the solicitors they hired to raise money!)”

Indeed, the story of Kid’s Wish Network sounds eerily similar to Pallotta’s own checkered past.

So, whether you are a committed Pallotta fan or you are throwing fruit at the online video, it’s way past time to move beyond the hype, beyond the individual, and really consider what this sector needs to do to become more powerful and influential in the future of the country. We can do better.—Jennifer Amanda Jones

This article has been altered from its original form. Additional information has been added to address concerns raised by Mr. Pollotta.