Building Communities, One Art Project at a Time 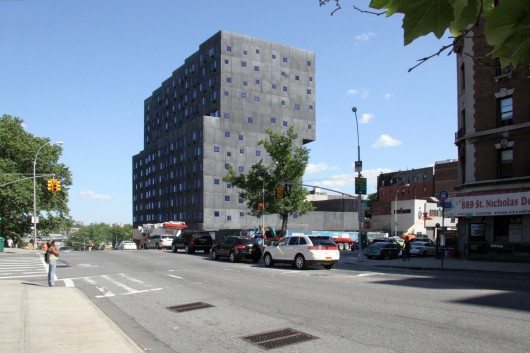 When the nonprofit Broadway Housing Communities opens a new apartment complex this fall in West Harlem, its ground floor will be occupied by a 15,000-square-foot space to be known as the Sugar Hill Children’s Museum of Art and Storytelling. But even before the museum officially opens and the 13-story affordable-housing complex welcomes its first residents into their new homes, the Sugar Hill Building is already being animated with temporary art installations, thanks to the efforts of No Longer Empty, an organization that specializes in what it calls the “interim-use model” to fill otherwise-vacant urban spaces with art.

According to its website, the mission of No Longer Empty “is to widen the audience for contemporary art, to promote socially conscious artists, and to build resilience in communities through art.” Their modus operandi is to present “professionally curated, site-specific art exhibitions where a community of artists, educators, scholars and the public come together to create and experience art, free of market imperatives and institutional constraints.” Previous projects have included art installations in empty storefronts, an old belt factory, and the run-down Chelsea Hotel.

The exhibition in the Sugar Hill building is collectively called “If You Build It” and includes murals, sculptures and other works described as “a gleaming steel riff on cursive graffiti” and “a red velvet runway hung with crowns.” Some of the artwork celebrates the glory days of Sugar Hill, considered to be the epicenter of the Harlem Renaissance during the 1920s and a neighborhood that the likes of Duke Ellington, Thurgood Marshall and W.E. Du Bois once called home. But the exhibit—which features the work of more than 20 local, national and international artists—does not shy away from the community’s more troubled recent history, with installations that address issues of racial profiling and homelessness.

No Longer Empty notes on its website that the exhibition addresses “cycles of urban decay and regeneration; building community through shared heritage; immigration and displacement; the longing for home in all its senses; and the vast economic disparities that plague our cities.”

Broadway Housing Communities (BHC) was established in 1983 to provide affordable, permanent homes to redress the problem of homelessness. BHC opened its first housing development in 1986, and Sugar Hill is its seventh project. BHC is considered a pioneer in the field of “supportive housing,” with on-site support services for those who need them built into the plans for each development. Since the late 1990s, BHC has been incorporating art and art education into its supportive housing model.

The Children’s Museum of Art and Storytelling will operate alongside an early childhood center, which will include several universal pre-kindergarten classes and which will provide access to museum-based learning for some of the building’s youngest residents. And as noted on the BHC website, it has the potential to positively affect the neighborhood in other ways, too: “Children’s museums serve as town squares, building social capital and strengthening community resources that educate and care for children.”

BHC notes that the Sugar Hill building “has been galvanized by generous philanthropic support.” Of the 124 apartments at Sugar Hill, 25 have been designated for homeless families; nearly 50,000 applications were received for the remaining units.

Some months ago, NPQ reported on another partnership between a community center in a public housing project and an arts organization on New York’s Upper East Side, with the support of social service agencies.

Indeed, the nonprofit social services and arts communities are increasingly keeping company with each other. A website devoted to careers in social work highlights “The 25 Most Amazing Community Arts Projects,” each of which engages participants in both self-expression and community building, while at the same time addressing underlying social issues.—Eileen Cunniffe