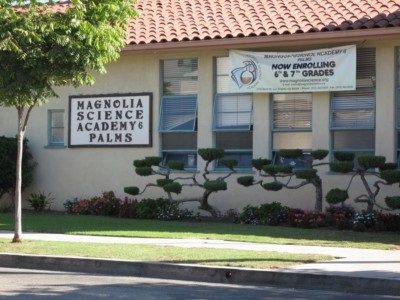 A fiscal audit of two Los Angeles charter schools for fiscal mismanagement has led to concerns about the two charter schools’ parent organization. The audit led to the closing of Magnolia Science Academy-6 and Magnolia Science Academy-7 for reasons, according to L.A. Unified district, that included “a number of irregularities.” However, the audit also apparently revealed that the charters’ parent, Magnolia Public Schools, may itself be insolvent.

The news about the two Magnolia schools in Los Angeles has been noticed by other localities that host Magnolia charters. The Santa Clara County Office of Education last year renewed a charter petition for a Magnolia school outside of Cupertino, but is now concerned. “We will pay attention to this—we wouldn’t want to find out that our [Magnolia charter] school would have to close because other [Magnolia] schools are in trouble,” said Don Bolce, Santa Clara’s director of special projects. “We recognize that with a charter school that is part of a charter management organization, a problem at one school could impact other schools – if there is a problem, it endangers the system.” Magnolia’s charter school in Santa Ana, according to L.A. School Report, “has been of concern to school and county officials in Orange County despite winning approval for $18 million in facilities bond money.”

The Magnolia charter school system has had its ups and downs over the years, with some schools closed in other districts. But the 11 operating Magnolia schools, including eight in the Los Angeles Unified School District, are not ordinary charter schools, assuming there is any such thing. A Turkish newspaper, the Daily Sabah, indicates that the Magnolia schools are affiliated with a Turkish movement called the Gülen Movement. A website for the Gülen movement, also called “Hizmet,” describes the movement as “a faith-inspired, non-political, cultural and educational movement whose basic principles stem from Islam’s universal values, such as love of the creation, sympathy for the fellow human, compassion, and altruism,” establishing schools and universities around the world to carry out the beliefs of Gülen.

The Daily Sabah, supportive of Turkish government authorities, has a much more negative characterization of Gülen.

“The movement is led by a controversial imam living in rural Pennsylvania in self-imposed exile, who is at odds with the Turkish government over the influence he wields inside the Turkish police forces and top judiciary. Prime Minister Recep Tayyip Erdoğan recently requested the extradition of Fethullah Gülen both privately and publicly from the Obama administration and accused Gülen of plotting a judicial coup against the Turkish government before the local elections last March.”

The Hizmet Chronicle, a news outlet that is supportive of the movement and critical of the Turkish government, has charged that the press has smeared Gülen schools, with the Erdoğan-connected Turkish press playing a role in headines about other Gülen-related schools.

Another website provides a somewhat dated list (as of 2011) of Gülen-affiliated public schools, numbering perhaps as many as 140, including 44 in Texas and 19 in Ohio, though it seems that they aren’t all part of the same network or management. Why charter schools? A 60 Minutes piece on Gülen schools makes the connection to the Gülen belief system:

Living in exile in a gated retreat in Pennsylvania’s Poconos, “the Turkish imam Fethullah Gülen…tells his followers that to be devout Muslims they shouldn’t build mosques—they should build schools; and not to teach religion, but science. In sermons on the web, he actually says: ‘Studying physics, mathematics, and chemistry is worshipping God.’ So Gülen’s followers have gone out and built over 1,000 schools around the globe – from Turkey to Togo; from Taiwan to Texas.”

We certainly don’t know enough to comment pro or con about the Gülen movement and the insinuations against it lodged by the Erdoğan government. However, there have been criticisms, highlighted in the 60 Minutes coverage, that the Gülen charter schools are, according to a whistleblower, basically a money-making operation and a ruse for getting Gülen’s Turkish acolytes visas. If the Gülen schools are business ventures first and educational institutions second, the shutting down of Magnolia schools in Los Angeles suggests that the business plan might not be working in some geographies.

But without taking a position regarding Gülen versus Erdoğan, we can suggest that creating charter schools that overtly or covertly pursue a specific quasi-religious message, even to the point of one linked to a cultish leader like Gülen, shouldn’t be part of the K-12 public school system. Even if Gülen’s reported vision of Islam is positive with its emphasis on science, to the extent that it is tied to religion and doing battle with other interpretations of the Koran, it doesn’t really belong in a public school system—Rick Cohen