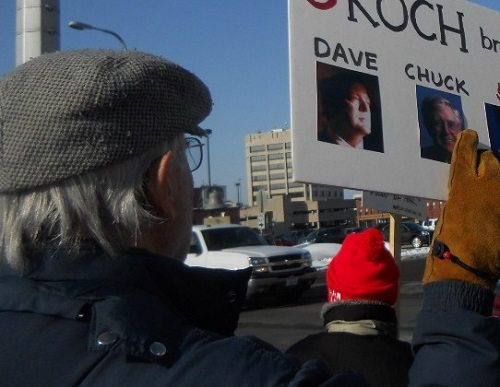 Given that the Federal Elections Commission ranks as the most dysfunctional agency in the federal government and the Internal Revenue Service has been hobbled by the dual blows of a scandal in the Exempt Organizations division compounded by a backlog due to the partial government shutdown, it appears that the regulation of campaign contributions in American elections flowing to and through dark money is going to be done by the states or not at all—at least for a while.

In California, the Fair Political Practices Commission got two organizations with ties to the politically conservative Koch brothers to pay a $1 million fine due to campaign violations incurred in their spending of $15 million to defeat ballot initiatives concerning a tax increase and union influence in the state last year. The two Arizona-based groups had failed to properly report the sources of their funding. In other words, donors, many of them from California, donated to these Arizona dark money groups to circumvent disclosure requirements that California placed on groups funding (or opposing) ballot initiatives.

Rob Tappan, a representative of the Koch brothers, including their philanthropic and business interests, said that the brothers “had no involvement whatsoever, financial or otherwise” in the two ballot initiatives, and “did not give directly or indirectly to any nonprofit group in support or defeat of these ballot initiatives.” That statement would suggest that the groups were hermetically sealed off from Koch money, but the Bee article implies otherwise, describing the Center to Protect Patient Rights, as “widely associated with the Kochs.”

This isn’t to say that had these groups accurately reported the names of their donors to the FPPC that the public would have been informed, but in an apparently unintentional step toward transparency and disclosure, the FPPC released a “sloppily redacted” filing of the donors to these groups, with enormously intriguing results:

So where is the Koch connection? The Sacramento Bee describes what is essentially an infrastructure of Koch brothers’ nonprofits through which individual donors run their money to influence elections and referenda without having their identities revealed. The following infographic produced by the Bee shows how the money flowed from donors through Koch nonprofits to California campaign committees: 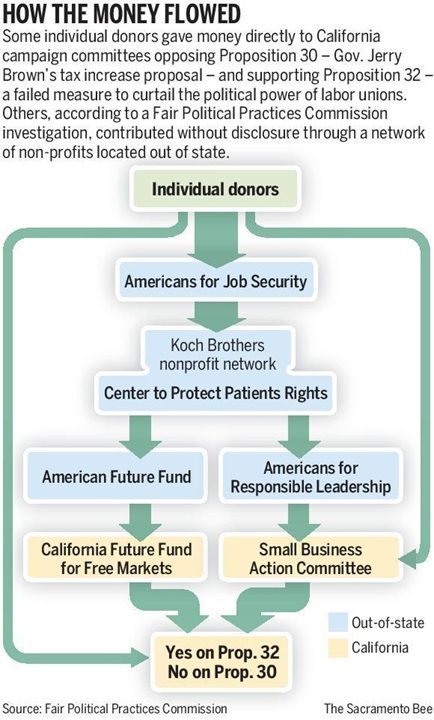 The outgoing chair of the FPPC, Ann Ravel, is in the process of becoming a member of the Federal Elections Commission. Perhaps her track record of accomplishment at the FPPC will have some educational effect on her new FEC colleagues. We don’t have high hopes. What we do hope for, however, is that in state after state, from California to New York, the public gets sick and tired of the role of secret money in political campaigns. Most voters don’t have the millions available to the Fisher family, Eli Broad, or Charles Schwab to covertly influence elections. They want to know who is buying their elections. They want real-time disclosure. In fact, they probably want the money of these corporate moguls out of the political picture. It’s time.—Rick Cohen