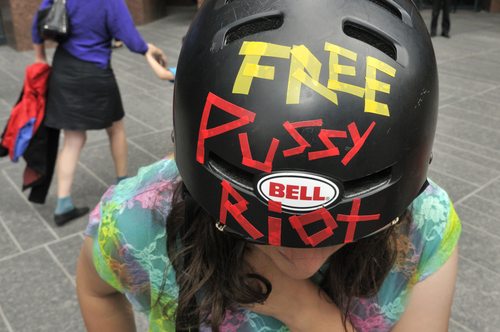 Three members of Pussy Riot, the Russian feminist rock band have now been sentenced to two years in prison for protesting the Russian Orthodox Church’s involvement in Russian politics and elections. Nadezhda Tolokonnikova, Maria Alyokhina and Yekaterina Samutsevich had already been jailed for more than five months. The protest in question took the form of a 40-second-long musical plea—“Mother of God, cast Putin out!”—in Moscow’s Christ the Savior Cathedral. The performance had the women dancing near the altar in brightly colored clothes and balaclavas. While many are decrying the sentence as too harsh and emblematic of Putin’s increasing intolerance of dissent, the language used in the sentencing (assuming it has been reasonably translated here by The Guardian) is even more alarming on many levels.

When sentencing the members of Pussy Riot, Judge Marina Synova said that the women’s “religious hatred” was driven “by way of them being feminists who consider men and women to be equal.” Further, asserted the judge, the three young women “suffered from mixed personality disorder displayed by their active position in life.”

Anyone up for pillorying a few “possessed” or “hysterical” women? (Rise up, ladies.)

In calling for the women’s release, The Guardian writes that Putin has made a mistake in that his “autocratic state has been taunted into a gross overreaction that has made the president in particular look fearful and foolish. This is a man, lest we forget, who has made much of his macho credentials, being photographed bare-chested on horseback with a rifle, riding a motorbike flying a Russian flag at a biker festival and darting a tiger.” Some believe that the persecution of the group has been a clumsy maneuver but others, like journalist Oleg Kashin, believe that it is a calculated attempt to set up the “simple” people of Russia against the “creative class,” members of which are reportedly believed to have largely peopled the protests in December calling for a free and fair election.

The outcry against the sentence has been loud and widespread. Artists all over the world have protested that this is a suppression of artistic and political expression. The international outcry is needed since, in an editorial,

The Moscow Times writes that although the sentence is unfair, the vast majority of the Russian people are unlikely to protest.

In terms of expressions of dismay from other political leaders, Haaretz writes that the European Union’s foreign policy chief, Catherine Ashton, has called the sentences “disproportionate” and part of an attempt to intimidate Russian opposition activists. German Chancellor Angela Merkel also says that the sentence is “excessively harsh” and “not compatible with the European values of the rule of law and democracy to which Russia, as a member of the Council of Europe, has committed itself.” She added, “A dynamic civil society and politically active citizens are a necessary precondition for Russia’s modernization, not a threat.” British Foreign Minister Alistair Burt said the sentence “calls into question Russia’s commitment to protect fundamental rights and freedoms.”

And obviously human rights organizations have been vocal all along about the arrest, trial and sentencing. Amnesty International said that the verdict was “a bitter blow to freedom of expression” in Russia, and that the organization “considers all three activists to be prisoners of conscience, detained solely for the peaceful expression of their beliefs.” John Dalhuisen, director of Amnesty International’s Europe and Central Asia program, called on Russia to release the three immediately and unconditionally.

On Saturday, some Russian Orthodox Church leaders asked that the women be shown mercy by leaders even while they still assert “such actions should be cut short by society and the authorities.” Some see this as giving Putin a little room for backing off, but clearly the pressure needs to be maintained from as many points as possible. –Ruth McCambridge