Can Tom Harkin Be Persuaded to Un-Retire? 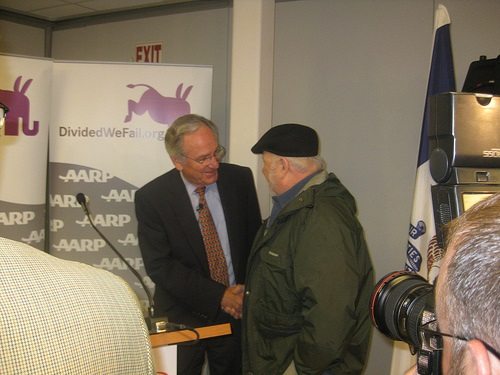 Maybe in the rough and tumble of Iowa politics, Tom Harkin is a pit bull, but in Washington, he routinely impresses as the most genial of sorts on issues of concern to nonprofits. The other night, he gave some off-the-cuff remarks at a congressional reception for the National Council on Independent Living (NCIL), whose 2014 legislative and advocacy priorities booklet is chock full of bills for improving the lives of persons with disabilities which all seem to be connected to the retiring Iowa senator. During his remarks, while dealing with an intermittent mic, Harkin touched on a number of legislative things he wants to get done before his term and senatorial career end this year and complimented his Republican colleagues when they stood with him on issues of disability resources and laws. He cited former Kansas senator and Republican presidential candidate Bob Dole in particular (“thank God for Bob Dole,” he said) for his active support of the Convention on the Rights of Persons with Disabilities, which remains only a few votes short of Senate ratification due to the fears of some that this UN treaty, modeled on the Americans with Disabilities Act (ADA) that Harkin originated in Congress, will somehow undermine U.S. sovereignty or something like that.

For those of us who have had to shake hands with and accompany politicians of all stripes over the years, Harkin seems truly genuine. His banter last week with comedian Seth Rogen about the use of the term “knocked up” in Rogen’s testimony on Alzheimer’s disease revealed the Iowa senator’s sense of humor, who accepted Rogen’s feeling of faux insult for Harkin’s having not seen Rogen’s movie. The banter continued:

Rogen: “Oy, you’re not going to like the rest of this, then.”

Besides Harkin’s genial and bipartisan approach to getting things done on Capitol Hill, without a doubt countercultural at this moment in political history, what might nonprofits look to as the things the Iowa senator will get done by the time he leaves the Senate?

If you want a sense of Tom Harkin as a senator and as a man, realize that this past week he kicked off a monthly lecture series, co-hosted with Tennessee Republican Lamar Alexander, on the deaf community and the deaf culture. Part of this program will include teaching senators and staff members some basic phrases in American Sign Language (ASL) to more effectively communicate with deaf and hard-of-hearing visitors to their offices. The first lecture in the series was by Howard Rosenblum, the CEO of the National Association for the Deaf, who also taught the assembled senators and staff members a few words in ASL. At the NCIL reception, where Rosenblum was in attendance, Harkin joked about the difficulty of learning the word “kickoff” in ASL, as the sign didn’t quite look like a kickoff.

The overt enthusiasm of the NCIL crowd wasn’t just because Harkin is the author of the ADA and a continuing advocate for causes for persons with disabilities. It was to honor Harkin as one of a slowly disappearing breed of national politicians who are more than party-politics automatons, but real people who care deeply and personally about the issues.—Rick Cohen