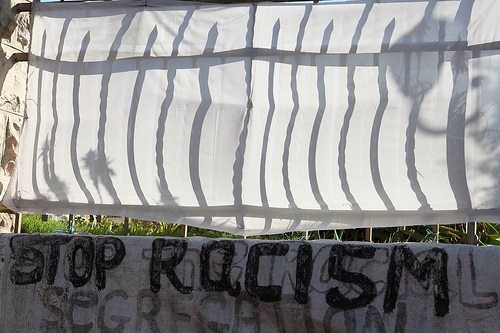 Is it just us, or does casual racism still show up in day-to-day political discourse without much reaction? Take this past week’s Value Voters Summit, an annual gathering of conservative activists at which potential Republican presidential candidates show off. One of the more visible conservative activists, Tony Perkins, head of the 501(c)(3) Family Research Council, lauded the star turn of Senator Ted Cruz (R-TX) with a distinctive turn of phrase:

“At the heart what they are looking for is leaders who will say what they mean and mean what they say. They’re not looking for nuanced speeches. I think that’s why Ted Cruz gets such a strong reception—he just says it like it is. He doesn’t kind of shuck and jive, he says what he means.”

Perkins choice of words echoed those of another Value Voters speaker, former Alaska governor Sarah Palin, who in 2012 accused President Obama of a “‘shuck and jive’ act.”

It isn’t being “too PC” to explore the derivation of the phrase and realize that it is basically only applied to blacks. Its origins are in the behavior of blacks during and after the period of American slavery as a tactic of survival and passive resistance to white overseers. It is not a phrase generally applied to whites.

It’s one thing for Palin to use the term and get reviled in the press, but as the head of a powerful nonprofit, Perkins ought to have been called to task by other nonprofits. It shouldn’t have to be a black leader or a black organization that calls out Perkins.

Does this have any relevance to the institutional or structural racist elements that envelop so much of our society? Our sense is that it does; statements like those of Perkins and Palin reflect a dulled sensibility of some Americans to issues of race.

For example, in the wake of the Ferguson police chief’s recent videotaped apology for the killing of teenager Michael Brown, the New York Times reported that Ferguson police officers were wearing “I am Darren Wilson” bracelets and covering their nameplates with black tape, earning a critical letter from Christy Lopez, the deputy chief of the special litigation section of the civil rights division of the Department of Justice.

Explain the racial underpinnings of the effort of the St. Louis Economic Development Partnership to hire a consultant to help the Ferguson police chief craft and launch his apology tour, several weeks after Michael Brown’s body lay in the middle of the street for four hours. On the Partnership’s website, a statement from Denny Coleman, its CEO, dated September 11, 2014, called for the region to “launch positive marketing and public relations campaigns to combat what the world witnessed live on CNN” but suggested that “there will be a time for that, but it’s not now.” Notwithstanding that commitment, the Partnership went ahead with an effort to boost the police chief’s public image, which resulted in seven arrests as residents of Ferguson expressed shock and disbelief at the police chief’s statements.

Issues of structural racism are difficult to get at, as nonprofits and foundations trying to raise those issues know all too well. But the casual racism reflected in Tony Perkins’ “shuck and jive” statement, if not countered by the Family Research Council’s 501(c)(3) peers, constitutes a level of impediments that makes action against racism all the more difficult.—Rick Cohen