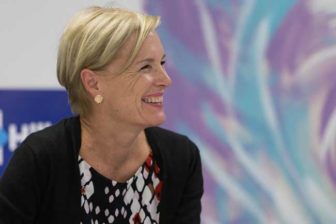 The Washington Post reports that Cecile Richards, who has led Planned Parenthood for over a decade, will be stepping down this year as CEO of the powerful and resilient national nonprofit. In the last year alone, the Post notes that “Richards helped position the group at the front of the Democratic “resistance,” growing from 9.5 million to 11 million members” since the 2016 elections.

It’s significant that she feels able to depart now, even as the battle wages on. Richards’s term was marked by growth, activism, and grace under fire. She calls her role leading Planned Parenthood “the honor of my lifetime.” Her love and respect for this organization may give us some indication of why she has been so successful in a role to which she brought a strategic mind, political savvy, organizational wisdom, an obvious sense of integrity, and a motivating respect for and engagement of millions of supporters.

Nancy Northup, president and CEO of the Center for Reproductive Rights, said, “Cecile Richards has left an indelible mark on the fight for reproductive health and rights, and millions of people are better for it…Cecile built Planned Parenthood into an even stronger, more relevant provider of reproductive health care and a political force to be reckoned with.”

Cecile has shown what it means to be a true fighter for the rights of women. In the face of unprecedented attacks, she has never backed down from a fight and always stood strong for the patients and doctors at Planned Parenthood and women across America. She put inclusive access to reproductive health care at the forefront of the political conversation and has shown it is not only key to women’s well-being, but also to true equality.

Richards will reportedly remain active in the organization’s key advocacy fights as Planned Parenthood heads into the long slog leading up to the November 2018 midterm elections. The election will mark two years since President Trump’s election. Trump’s election, combined with previous Republican Party gains in 2014, gave Republicans control of both houses of Congress, as well as control of a majority of state legislatures and governorships across the country. This political lineup led many women to fear that their access to reproductive health services would be curtailed.

Richards stepped up and became an icon to those millions of women; thanks to her public appeals on behalf of her organization and her bold commitment to its values in the face of political opposition, led 80,000 to make “rage donations” just in the first week after the election, and Richards joined her organization as a household name.

The Washington Post noted in 2016 that “In a lineup of past presidents of Planned Parenthood, which has a separate political action committee, Richards stands out—her background isn’t in women’s health care. It’s in organizing and politics. And she has deployed her skills in those fields to win major battles for abortion rights.” In fact, in 2008, she told the Take Back America conference, “We aim to be the largest kick-butt political organization.” That promise was kept.

Leading Planned Parenthood over the last 12 years has been the honor of my lifetime. Together, we have made real progress in this country, expanding access to services and making reproductive rights a central priority of our nation’s health care system. I’m deeply proud of the progress we’ve made for the millions of people Planned Parenthood health centers serve across the country each year. Planned Parenthood has been a trusted resource in this country for more than a century, and I will be leaving the organization well-positioned to serve and fight for our patients for a century more. Every day we see the incredible power that grassroots voices can have — there has never been a better moment to be an activist. You can bet I’ll be marching right alongside them, continuing to travel around the country advocating for the basic rights and health care that all people deserve. I’ve been an activist my entire life—and that won’t stop any time soon.

Planned Parenthood will no doubt feel the loss of this formidable woman at its helm, but Richards, 60, has not given up the fight. At “Power to the Polls,” an event commemorating the one-year anniversary of the Women’s March in Las Vegas, Richards told the crowd, “Women have beaten the odds to elect our own. Last year we dared to hope for a better, brighter, more equal and inclusive world. And this year we’re going to go out and build it.”—Carrie Collins-Fadell and Erin Rubin