Charity and Dedication: 2,739 Push-Ups a Day for One Year 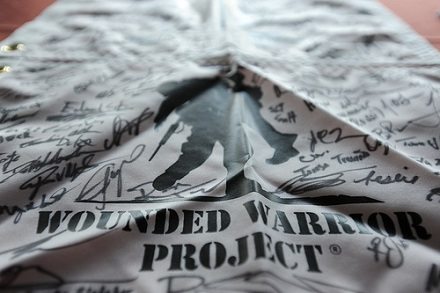 One million push-ups in a year. That is the goal of Sgt. Enrique Trevino’s charity initiative to benefit the Wounded Warrior Project. Trevino is a Marine who has served in Iraq and is now stationed in Fort Lauderdale, Fla. ABC News puts this into perspective by noting that one million push-ups in a year is “roughly 2,739 pushups a day, 114 an hour, or 2 a minute. Assuming you don’t sleep.”

How does Trevino plan to accomplish this feat? “In the morning before I go to work I’ll probably knock out maybe 500 or 600 push-ups,” Trevino says. Then, he adds, “I do push-ups every five to 10 minutes and generally try to get 25, 35, sometimes even 50 push-ups in one sitting…I continue this pace all the way up until lunch time when I’m at work, which is really good because I work with the Marines. They’re real supportive. They don’t ever have a problem with me dropping down and doing pushups.”

As we scan the headlines at NPQ, we come across lots of “X to do Y” for charity stories that garner significant media attention. Some of them are those “offbeat” stories, like people posing nude for calendars with proceeds to go to cancer-related groups. Others promote upcoming events with a philanthropic twist such as your charity golf tournament. Others are those celebrity stories that always draw coverage, such as Heidi Klum’s pledge to go without makeup for a day for the BBC Children in Need charity. But every once in a while, we come across an “X to do Y” for charity story that turns our head not just because of the worthy “Y” involved, but because of the impressive nature of the “X” task at hand, and the daily dedication required to follow through. Trevino’s charitable endeavor has the extra benefit of being a cultural fit for the cause, which is often what captures the attention of likely givers. As a fundraiser, Trevino is nothing if not creative, unique, and inspirational…and apparently effective. –Mike Keefe-Feldman