Charity’s Odd Moral: Next Time, Don’t Save Children from Sharks 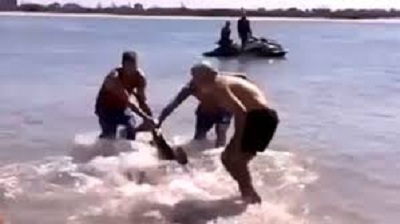 A man who worked for a Welsh community center has been fired after saving children from a six-foot-long shark that was swimming towards the kids. He grabbed the beast (no offense to shark lovers) by the tail and dragged it into deeper waters. At the time, 62-year-old Paul Marshallsea of Merthyr Tydfil and his wife, Wendy, were program coordinators at the Pant and Dowlais Boys and Girls Club, but after 10 years, they were on extended sick leave for work-related stress.

While on leave and on the advice of a doctor, the couple traveled to Australia to stay with friends and it was while barbequing on the beach that Paul noticed the shark’s fin and ran into the water on his hero’s mission. Unfortunately, in so doing, he captured media attention, which, in turn, captured the attention of higher ups at the charity who later informed him by mail that he had been let go. The BBC saw the letter and reports that an excerpt of it reads, “Whilst unfit to work you were well enough to travel to Australia and, according to recent news footage of yourself in Queensland, you allegedly grabbed a shark by the tail and narrowly missed being bitten by quickly jumping out of the way.”

Okay, we don’t get it. Maybe it’s a cultural difference, but it seems like it might be advisable, once you have mutually decided with your employer that you need a break, that you actually remove yourself. And then, once you get there, we believe that one should attempt to save children from sharks if the opportunity presents. We are not sure why the act casts doubt on the guy’s integrity.

Paul Marshallsea’s comment, however, does resonate: “The stress of running this [community program] in your own community – it’s like a monster…We created a whip to hit our own backs. It grew so big and we didn’t realize. There was no stopping it.” –Ruth McCambridge