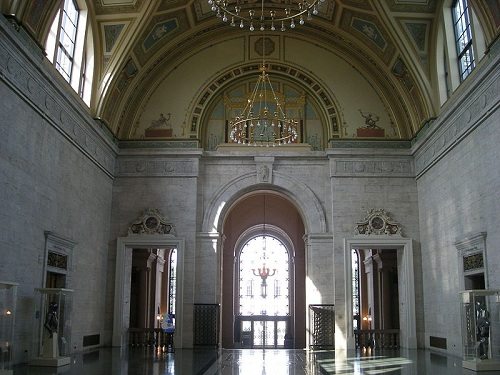 For at least the last two months, there’s been plenty of speculation about the potential for works from the Detroit Arts Institute (DAI) to be sold as the city reckons with its dire financial situation. In July the city became the largest to seek Chapter 9 bankruptcy protection from the federal government in an effort to stave off creditors who are already owed more than $1 billion, with longer-term debt project at $18 to $20 billion. The ownership of the artwork—and the underlying legal complexities—have been addressed elsewhere, including here in NPQ.

The new wrinkle this week is that the world-renowned auction house Christie’s has now been retained by Detroit to appraise the value of a portion of the DAI collection—presumably some of the higher-end works, which include paintings by Van Gogh, Renoir and other masters. Christie’s confirms on its website that it has been hired for this work. The messages surrounding the city’s intentions with the DAI collection are an abstract work in themselves, open to many interpretations.

As noted in a Fox News report, the DIA told the AP on Monday “that it would cooperate in Christie’s appraisal process, but pointed to a formal opinion by Michigan Attorney General Bill Schuette that said city-owned DIA pieces can’t be sold in a bankruptcy proceeding. He said in June that the artwork is held in a charitable trust for Michigan residents.”

Detroit Emergency Manager Kevyn Orr, who warned DIA officials earlier this year that the artworks could be considered assets in a bankruptcy, said Monday that the appraisal process does not portend a sale and that “there has never been, nor is there now, any plan to sell art.”

Which brings up the question of how Detroit could possibly squander its oh-so-precious resources to hire Christie’s at this moment in its fiscal crisis if it were not at least considering parting with some of its art treasures.—Eileen Cunniffe