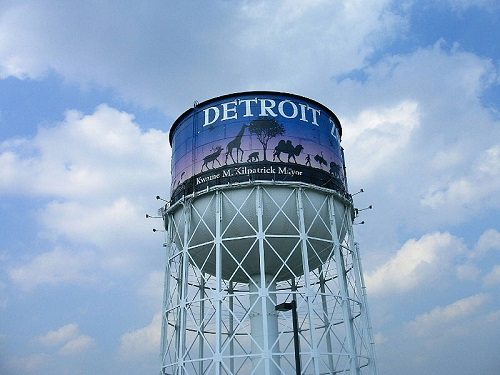 In the midst of the Detroit water crisis, there were active and credible suspicions that the city was thinking about privatizing its water system by selling to a corporate entity. Organizers placed the potential privatization of Detroit Water in the public spotlight, which may have ultimately compelled the department to abandon those ideas in favor of converting to a regional but still public water system, at least for the moment.

A new report from Corporate Accountability International, “Troubled Waters: Misleading Industry PR and the Case for Public Water,” addresses the privatization juggernaut to describe how some cities have dealt with corporate pressure, especially since some of it is predicated on the needs of U.S. water systems for as much as $4.8 trillion in investment in the next 20 years, as private companies, such as the French multinational Veolia Water North America, hinting that privatization would help create the needed capitalization.

The report describes elements of Veolia’s strategy in St. Louis. One example is their offer of consulting services (through Veolia’s Peer Performance Solutions) that would cut public water system costs, but in reality would be a foot in the door toward privatization. After years of pitching, Veolia got the city, including Mayor Francis Slay, to approve a Peer Performance Solutions contract with Veolia, but community activists and nonprofits challenged the idea. Activists formed the St. Louis Dump Veolia coalition to oppose the contract. The Great Rivers Environmental Law Center did its own analysis of the proposed contract, finding that the “contract will have the effect of privatizing the city’s Water Division, and will make city residents captive to Veolia.” According to the Corporate Accountability International report author, Emanuele Lobina, the terms of the Veolia contract would make Veolia “the private owner of all ideas for improving the St. Louis Water Division.”

Slay did everything he could to get the Board of Alderman to approve the contract with Veolia, but the aldermen didn’t go along, and ultimately, Veolia withdrew. Maybe the St. Louis alderman were cognizant of the number of U.S. cities—currently 33—that have “re-municipalized” their water systems after being disappointed with the performance and follow-through of the private water companies.

Just outside of St. Louis is the suburb of Ferguson, where privatization has been in full swing for some time. Mark Ames of PandoDaily reported in September that Ferguson has been implementing privatization schemes designed and promoted by the Reason Foundation’s Bob Poole, a longtime associate of the Koch brothers, who provided the support for the Foundation’s creation. A number of members of the Ferguson Commission do not appear to be diehard opponents of privatization, and may actually support it in a reflexive way, as some people almost always think that private sector activity is somehow more efficient and effective than nonprofit or public. In light of the St. Louis Water story and Ames’s detailed description of the influence of Poole’s ideas in and around Ferguson, activists had better be prepared to watch out for and confront unnecessary or inappropriate municipal privatization as Ferguson fixes.—Rick Cohen