Civil disobedience continues to be a tool of social protest, sometimes in arenas where it isn’t typically expected or seen. Last week, police arrested and removed eight protesters linked to a group called 99Rise from a hearing of the Supreme Court of the United States. The protest was to mark the fifth anniversary of the Citizens United ruling that unleashed big corporate money in federal elections.

In a telephone interview, 99Rise leader Kai Newkirk said that protesters “stood up in the tradition of nonviolent dissent to speak out against corruption and to defend our democracy” by demonstrating against the Citizens United decision. The people arrested were charged with offenses due to having made a courtroom disturbance, including making “a harangue or oration, or uttering loud, threatening, or abusive language in the Supreme Court building.” According to Democracy Now!, the harangues and abuse included each of the protesters rising from their seats, one by one, and shouting “overturn Citizens United” and “one person, one vote.”

SCOTUSblog reported that Chief Justice John Roberts muttered “Oh, please” when the protest started and later helped out the police officers by pointing to a corner of the hearing room and saying, “We have a couple more over here.”

One of the eight 99Rise protesters also got a camera into the building to videotape the protest, which suggests that the security screening at the front of the SCOTUS building, meant to prevent cameras from getting through, somehow didn’t do its job.

Who and what is 99Rise, a 501(c)(4) social welfare organization? Its website describes 99Rise advocates as “the students and young people, the homeowners, the workers, the families, the immigrants, the seniors and retirees, and every other American sick of seeing their democracy serve only the interests of the 1%.” Its language of a “decentralized organization and distributed leadership” reflects its origins in the Occupy encampment in Los Angeles, though it clearly has involvement from many communities across the nation. Unlike Occupy, it apparently has a very concrete goal—a constitutional amendment to get money out of politics—and a national following. Newkirk was one of the founders of 99Rise back in 2012 and was himself arrested in 2014 for disrupting a Supreme Court convening (at which time they also smuggled a camera into the Court and released the first ever surreptitious videotaping of its proceedings). As this video shows, they succeeded again.

While the 99Rise protesters (seven of the arrested pictured) may have Occupy origins, they have a specific goal in mind and a strategy of nonviolent protest for getting there. In the midst of the inchoate Occupy protests, there was always the possibility, which we here at NPQ as well as others saw, that addressing electoral reform on behalf of the 99 percent against the stranglehold of the one percent might be a productive avenue for action. Chief Justice Roberts might want this group to go away, but the fact that is that 99Rise may be establishing some resonance with a strategy of nonviolent civil disobedience, reflecting the power imbalance between the unmoneyed 99 percent, who have to do things like vote and protest, and the moneyed one percent who can simply buy. 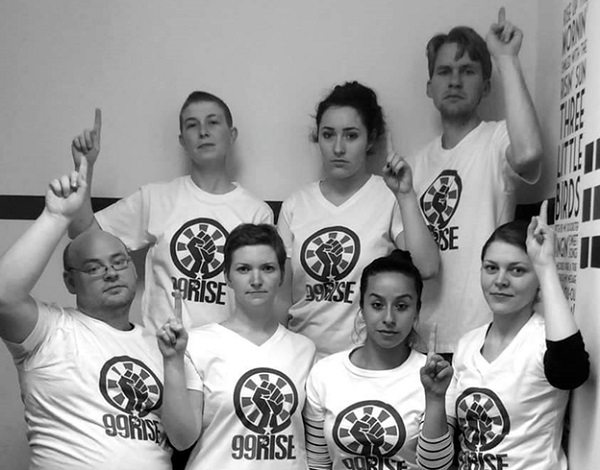