Civil Sector Needs to Make Some Noise about NSA—Now! 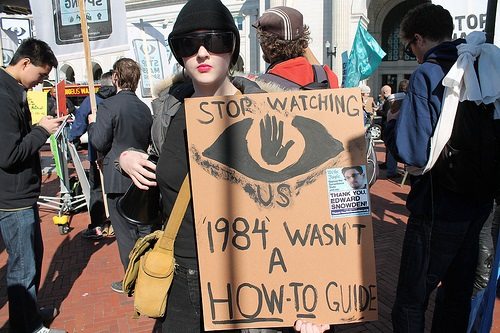 There is no question that mass surveillance can have a chilling effect on civil society, so why has this sector’s leadership been so quiet on the NSA metadata surveillance program? The idea that the government gathers information simply because it can is clearly core to our work as civil society activists.

In a strongly worded ruling, a judge in the U.S. District Court declared that the NSA surveillance program, which depends upon metadata compiled through the secret warrantless collection of phone records of nearly all Americans, was not only probably ineffective and unconstitutional, but “almost Orwellian.”

“I cannot imagine a more ‘indiscriminate’ and ‘arbitrary invasion’ than this systematic and high tech collection and retention of personal data on virtually every single citizen for purposes of querying and analyzing it without prior judicial approval,” said Judge Richard J. Leon of the U.S. District Court for the District of Columbia. “Surely, such a program infringes on ‘that degree of privacy’ that the founders enshrined in the Fourth Amendment.”

The program in question was revealed by former security contractor Edward Snowden in June, and this suit, one of a number challenging the program, was filed by two men, Larry Klayman and Charles Strange. Larry Klayman, who is a conservative opponent of the NSA’s surveillance, commented about the decision in the Guardian Tuesday morning.

Snowden responded to Leon’s ruling through journalist Glenn Greenwald, saying, “I acted on my belief that the NSA’s mass surveillance programs would not withstand a constitutional challenge, and that the American public deserved a chance to see these issues determined by open courts… Today, a secret program authorized by a secret court was, when exposed to the light of day, found to violate Americans’ rights. It is the first of many.”—Ruth McCambridge