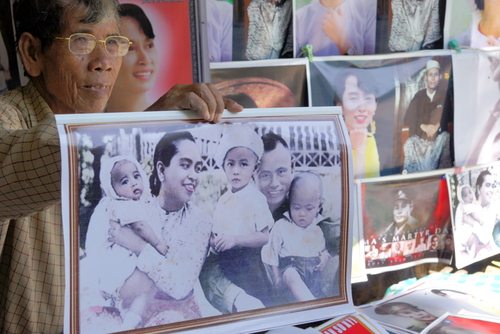 Foreign Policy’s list of the top 100 “global thinkers” includes plenty of our heroes and heroines, beginning with Aung San Suu Kyi, who endured some two decades of house arrest until the new head of the military junta, Thein Sein, let up on the military’s stranglehold and let “The Lady” reenter political life. Several people on the list possess strong roots and identities with the world of nongovernmental organizations (NGOs) and foundations. We specifically honor the global thinkers in FP’s top 25 who most NPQ readers might see as nonprofit leaders and thinkers as well.

3. Bill Clinton is joined by his wife, Secretary of State Hillary Clinton, in the third slot on the list, but the former president has morphed into the world’s leading international philanthropist, running his eponymous foundation and the Clinton Global Initiative with programs that take it into virtually every international hotspot and every critical international issue.

5. Bill and Melinda Gates make it into the top ten for running the world’s largest private development organization and dominating U.S. philanthropy’s engagement with international causes, but FP also credits Melinda Gates with “establishing herself as a powerful force in her own right, taking on the Catholic Church for its conservative resistance to contraception.” Her husband gets a special mention for the foundation’s hosting of a competition to develop a “super-toilet.”

6. Recovering in a British hospital from an assassin’s bullet, Malala Yousafzai is a brave avatar of social activism for her willingness to stand up to the Pakistani Taliban to advocate equal education rights for girls and boys. She nearly got killed for standing up to extremists for the crime of blogging about her observations of unequal education in the Swat Valley.

9. Malala is matched in bravery by Chen Guangchen, a blind Chinese self-taught lawyer who became a human rights activist, drawing the opposition of the powerful Chinese government. Now exiled in New York, like Malala, he is a global icon, but may never be allowed back into his home country.

10. Two of the three at number 10 are nonprofit people. David Blankenhorn is the founder of the Institute for American Values, where he was a leader of the opposition to same-sex marriage. This past year, he completely changed his mind and endorsed same-sex marriage as “basic fairness.” University of California-Berkeley physicist Richard A. Muller was a well known climate change skeptic who created the Berkeley Earth Surface Temperature project, partly funded by Charles Koch, which was expected to disprove global warming. It didn’t, and Muller completely changed, describing himself as a “converted skeptic,” confirming global warming trends, and concluding, “humans are almost entirely the cause.”

11. James Hansen, the director of the Goddard Institute for Space Studies, makes the list for having reached Muller’s conclusion about global warming at the outset and keeping climate change in front of the public as an issue that cannot be avoided. The quiet, 71-year-old scientist has turned into an activist, even getting arrested at the White House at a protest against the Keystone Pipeline.

16. The women of Pussy Riot made the top 25 for staging an internationally powerful protest against Vladimir Putin’s autocratic regime. FP says, “Just read the powerful closing statements at their closely watched trial – a ringing manifesto that puts them squarely in the tradition of Henry David Thoreau, Martin Luther King Jr., and Vaclav Havel.” Just read this line from Nadezhda Tolokonnikova: “People can sense the truth. Truth really does have some kind of ontological, existential superiority over lies.” If Pussy Riot were only a group of three “slam-dancing hooligans” as described by Russian authorities, then our conclusion is that we need more democracy-focused hooligans like these three women.

18. As president of the Tunisian Association of Democratic Women, Ahlem Belhadj is leading a movement against what she sees as an effort of Islamists to hijack the Arab Spring. She is organizing women to oppose efforts to reinstate polygamy and female circumcision and taking to the courts in cases such as defending a woman questioned for “indecency” after she was allegedly raped by two police officers. She is also speaking out against broader trends such as the draft Tunisian constitution, which describes woman as “complementary” to men.

19. Two Syrians made the list. Rima Dali, a volunteer for the Syrian Arab Red Crescent, was jailed by Assad’s regime for her temerity of standing alone, week after week, in a Damascus street holding a sign that read, “Stop the killing. We want to build a country for all Syrians.” Bassel Khartabil was a citizen journalist tweeting and blogging about the Assad regime’s crackdown until he was arrested and not heard from again. As he tweeted a few weeks before his arrest, “The people who are in real danger never leave their countries. They are in danger for a reason and for that they don’t leave.”

21. George Soros made the list, though not for his philanthropy or for his political donations (though this year, he suggested publicly that there wasn’t much difference between Obama and Romney). Rather, he told European countries that austerity measures to shrink their indebtedness wouldn’t work and were likely to achieve withered economies but not much debt reduction at all. Maybe that message will come home.

24. Economists Thomas Piketty from the Paris School of Economics and Emmanuel Saez from the University of California-Berkeley make the list for doing the research to show, in powerful graphics, exactly how well the top one percent of the population is doing. That provided the intellectual underpinnings of the Occupy Wall Street movement, even if the Occupiers haven’t endorsed the Saez/Piketty suggestion of a tax rate of 83 percent for the top bracket of taxpayers.

25. At No. 25 is a thinker. Nadim Matta runs the Rapid Results Institute, which, according to FP, “helps poor communities around the world set ambitious goals on timelines so short that they seem unreasonable – just 100 days.” It is a strategy of deadlines-driven social progress that is achieving impressive results.

Like Aung San Suu Kyi, the compelling characteristic of all of these global thinkers is courage—an intellectual courage, enabling them to speak the truth, and often, personal courage to withstand arrest, violence, and exile. At Nonprofit Quarterly, we salute them all.—Rick Cohen